What Is The Wisdom Of Minimum Wage?

National Minimum Wage Act 1998 was a flagship policy of the Labour government which officially came into effect on 1st April 99. The main reason as to why it was introduced is due to steadily declining membership in unions, particularly services sector. Weakening unions generally mean weakening bargaining power for employees

The minimum wage as at 1st October 08:

(c) £3.53 per hour for under-18s who have finished compulsory education 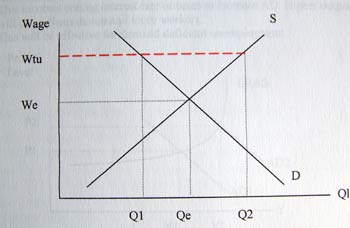 (2) Productivity argument. Minimum wage has the supply-side effect. Since people received higher income, they will be more motivated to work & as such this may lead to an increase in their productivity. It will be good for employers too since more output will be produced & this will lead to reduction of costs for every unit of output

(3) Stimulate consumption. Since people have higher income, it makes economic sense that they will increase their spending. It will have a great effect onto UK economy since its economic growth is consumption-led. To strengthen the argument, minimum wage applies only to low paid people & these are the people who have high marginal propensity to consume (mpc). In other word, tendency to spend more for every increase in £1 of disposable income. Unlike the rich, they have low mpc. Even if there is any increase in disposable income, they are unlikely to spend much since they have own many things

(4) Increase incentive to look for jobs. Introduction or any increase in minimum wage will create an incentive for jobless people to seek employment. This is because the opportunity cost of being unemployed has increased. In other word, the gap between wages & unemployment benefit has widened

(1) Fall in demand for labours. Firms are the buyers here. With minimum wage legislation, they find that hiring workers are now more expensive & as such will have the tendency to retrench workers. As such this has the effect of creating unemployment. Some firms do not reduce the amount of workers they have but rather make them work lesser hours a day to be cost competitive

(2) Hurting labour-intensive businesses. Textile factories, hotels & other industries which use up a large proportion of low-paid workers are the worst affected. With minimum wage, it simple means increase in production costs. However one could also argue that industries such as hotel have seasonal employment. Many of the jobs created are part time basis. For e.g. employment will increase during peak period such as summer holiday. Therefore, the increase in operating costs is viewed as temporarily

(3) Passing on the costs. One of the most common thing firms will do is passing on the increase in production costs to end consumers in the form of higher price. Slashing employment may not be the best solution as it may affect the smoothness in the day-to-day operation. Also one could argue that firms may not necessarily pass on the costs to customers. They may attempt to reduce their costs elsewhere like using lower quality materials in production or reduce its quantity of usage. Also they may start to look for new suppliers

(4) Does not increase productivity. Increase in productivity is sometimes true. In certain situation, workers may not even bother to increase their productivity since they know that whether they work hard or not, they still get the minimum wage just like those who work hard

(5) Disincentive to further education. Minimum wage could be a great disincentive for young people to pursue higher education, especially those who are under 18 but have finished compulsory education & to those between 18-21 years old. Depending on how high is the increase, the greater per hour pay, the greater will be the disincentive. In the long run, UK may have lesser number of educated workforce although the figure could be insignificant

In theory, minimum wage would increase unemployment. However, empirical evidence from both the States & UK suggest that moderate increase in minimum wage will not have an undesirable effect onto the economy. Thereby it will be interesting to find out, how much will minimum wage need to increase to begin having any effect onto employment
Posted by Lawrence Low at 7:41 AM