Lately, an insurance agent whom I knew through a friend of mine approached me with some ‘awesome’ savings plan offered by his company. Honestly, I couldn’t recall much of the conversation and financial planning tips thrown to me. It is more of his bragging about the potential return and how many people have actually hooked up the product that seized my attention. I was ‘enticed’ while going through the figures he computed.

It wasn’t any medical card or life insurance policy, but an alternative to the conventional savings like fixed deposits in the banks. It offers 4% return for the first 5 years, 5% the next few years and 6% on the following years. The maximum it offers is 6%. My friend, who sat next to me at that time was so eager to sign up considering the 4%-6% offered. I quietly told him to reconsider. 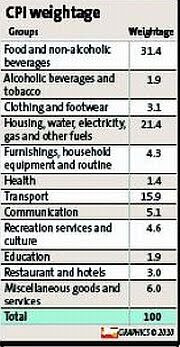 In Malaysia, CPI (price level) increases on the average of 3% every year. That has been the trend for the last three decades. It is even more important to note that rise in general price level does not reflect the actual situation face by average Malaysians as some will be more affected than the others. For instance middle-income households with large families or those parents who need to travel extensively everyday will be more affected than small families or those who stay within the vicinity say, 20km from their workplace. The CPI is just a weighted average!! It is fair if I say that personal expenses inflation is a better barometer

In that case, I believe that rise in expenditure on food, fuel and transport is definitely surpassing 3% every year. This is because subsidies on fuel, flour, sugar, rice and other necessities have been cut. Let’s not forget that we do not just consume flour, sugar, prawn, fish etc in its raw form but also in value-added items. Food that we consume in fine restaurants or even coffee shops are levied at market price but is not captured by CPI. Transport which carries the weight of 15.9% does not consider the ‘actual price’ of the cars when they are hire-purchased. Prices of construction materials such as cements and clinkers are price controlled, but the prices of house and rental is subjected to market force which is not regulated. Also, surprisingly mobile downloads and phone bills are not included in the communication category although they are integral part of our life

In a nutshell, price level will continue to increase and having a fixed return for a predetermined period is a BIG NO NO from me. If I were given an option, I would rather engage in investment like unit trusts that carry very little risks and yet potentially yield much better return. Let’s invest to beat the inflation

The Tale Of The Rising Yen

The recent Bank of Japan’s massive intervention into money market is one politically bold move which is least expected by many. It creates a surprise, since BoJ has been passive all these years. The last round it intervened was in 2004. Nonetheless, such action is greatly applauded by Japanese exporters, especially those in car (Toyota) and electronics industry (Sony). A weak yen is desired since it gives manufacturing industry a competitive edge. Japanese goods will look artificially cheaper especially to Americans and as such US will hopefully continue to buy from Japan, thus paving way for export-led recovery. It is done by using the yen to buy dollar

Why does yen appreciate?
(1) Profits are coming home. It is reported that Japanese firms will bring back at least 1.5 trillion yen ($16.7 billion) of overseas profits. More repatriation is expected since the government’s announcement of tax breaks last year. It is a measure to boost an economy in conundrum. Lower tax leads to higher retained profits, and hopefully companies will have greater incentive to invest. It could be on the purchase of new capital equipments, new building to accommodate enlarged scale of operations etc, although the effectiveness is subjected to debate. Earnings in dollar and euros will have to be converted back to yen. Therefore yen appreciates due to escalating demand for it

(2) End of carry trade. Before we go into details, it is best to understand what is meant by yen carry trade. It is a practice of borrowing money at low interest rates and lend them out in high interest rates. All these years, interest rates were purposely kept low to revive spending into the economy. As a matter of fact, it is reckoned that Japan has the lowest interest rates at all time in the world, ‘no thanks’ to its slumbering economy. Many people borrow from the Japanese banks and park their money elsewhere, say UK, US or even the Eurozone. In a more technical way it would be, borrow the money from Japan, lend it to the banks in Western economies to do business. In return, those people get higher interest rates gain, and some of it will be paid back to Japanese banks. The reward is the difference between those two interest rates. However, interest rates offered by major Western banks are equally low now. Hence, there is not much gain after all. Furthermore there is always a risk of lending money to a foreign economy that could face the risk of collapsing. Those arbitrageurs now call back their capital to repay their loan to Japanese banks. Again, we use foreign currency to demand for yen, leading to its appreciation

(3) Safe haven. Switzerland is well known as safe haven in the current credit turmoil, and ‘congratulation’ to Japan for joining the rank. The interesting issue here is why investors seem to lose interest with US? Normally, currency investors who seek for stable investment would like to park their money in US given the credibility of the world’s largest economy. Somehow, the dollar has been slumping against many other major currencies in recent weeks as interest rates continue to fall. This makes the dollar as less attractive investment compared to other currencies. Although Japanese debt as a percentage of GDP is twice as large as the US, let’s not forget that most of the debts are owned by domestic investors, given the high-savings ratio in the economy. Therefore Japan is very unlikely to become the victim of capital flight. Secondly, Japan is experiencing deflation. This means although interest rates are low, but real interest rates are high. Put it simple. Even though your money does not grow in terms of amount, things around you are getting cheaper. In short, with the same amount of money you have, you still get to purchase more goods and services. Hence, it creates an ‘illusion’ that Japan’s interest rate is actually higher than the rest of the world

(4) Purchase of government bond. We all know that Chinese monetary officials are the hiding-hands that lead to the steady appreciation of dollar against the yuan. They persistently keep the yuan low by buying US bonds, which subsequently lead to rising dollar. This move has been largely criticised by US lately since it gives the Chinese exporters an unfair advantage. Americans importers are trapped. They have ‘no other options’ but to continuously buy from China since it is artificially cheap. That explains why US is in large deficit and China is in large surplus. No wonder China has the world’s largest dollar reserves (more than 2 trillion dollar). But due to mounting political pressure, China seems to lose appetite for US dollars and begin to diversify into other currencies, including the Japanese yen. This contributes to rising yen against the yuan. However it is argued that the purchase of Japanese bonds is on small scale, and hence is unlikely to have a long lasting effect on yen

In the current credit crisis, rising value of home currency is the last thing all influential economies would like to see. Export-led economies like Japan and China would resist the most since their economic growth largely depends on it. The same goes for US that would like to export itself out of trouble
Posted by Lawrence Low at 9:33 AM 1 comment: