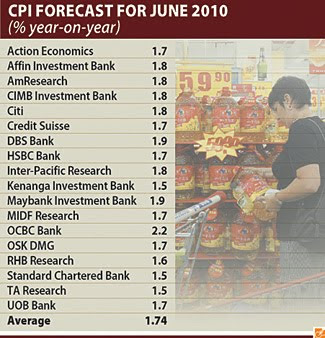 (7) Increase efficiency. Bus operators and cabs will have to be more efficient in order to maintain their profits. To bus firms, certain trips may need to be created while some others slashed. Salary to bus drivers and other maintenance charges will also need to be adjusted. To owners of private vehicle, they may need to plan their journey ahead to avoid travelling unnecessarily and caught in congestion which should cost them more
Posted by Lawrence Low at 9:41 PM No comments:

Why Inflation In UK Is Still High Despite Its Weak Economy?

The British economy is currently suffering from a period of high inflation, something which is usually against the norm especially when the economy is still in a dire state, with unemployment at record level of 8% and house prices on average are 10% below the level last seen in summer 2007

The present inflation rate is lingering around 3.1%-3.5%, much higher than both US and Eurozone of 0.9%. Given the high level of spare capacity due to rising unemployment and unutilised machineries, shouldn’t the inflation fall?

Here are some possible explanations:

(a) Weakening currency. The pound has weakened against major currencies like the dollar and euro in the recent few months. Since these two economies are major trading partners of UK, any changes in the direction will therefore have a significant impact towards the level of inflation. A weaker pound means finished and semi-finished goods from Germany and US will be artificially more expensive. To stay profitable and preserve company’s balance sheet during stormy days, inevitably some of these costs will have to be passed on to consumers in the form of higher price, hence inflation

(b) Higher price of energy. Although the Western economies slow down markedly, this isn’t the case for many Asian economies. Malaysian economic growth is vibrant somewhere close to 10%, Singapore’s growth soared to an unprecedented level of 19.3% in second quarter of 2010 (July 14th 2010) and China despite slowing down is still able to retain double digit growth of 10.3%. The rapid growth rate in Asia explains why oil prices remain obstinately high at more than $80 a barrel as it is widely used to fuel economic activities like shipping, more cars and trucks on the road, more business flights etc. Higher oil price coupled by weakening currency explain why petrol price is high in UK. It will feed through the entire chain of production process as businesses trying to protect themselves

(c) VAT (Value Added Tax). This is similar to sales tax. It was raised to 17.5% early this year, and there it has been confirmed that will be further increased to 20% from 4th January 2011. Although it is a painful measure, it is viewed as necessary to pay off the deficits that Labour government ran up. It is estimated that VAT alone will help to raise £13 billion a year under the Coalition’s ambitious plan to eradicate deficit in five years time. This will cause price of cars, flat screen TVs and many other goods to increase in price

(d) Firms shielding themselves. Another possible explanation for the high inflation is that businesses are trying to protect their own profitability. Since the financial institutions are still surrounded by pessimism, many firm still find it difficult to get the needed financing for their operations. With rising excess capacity hence a fall in demand for goods, these firms will have to raise some of their prices to stay profitable as before especially in segment of goods where demand is still inelastic. Therefore prices are still high
Posted by Lawrence Low at 8:59 AM No comments: