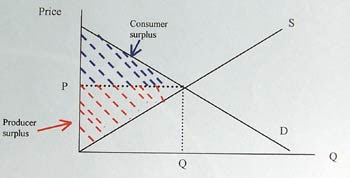 Consumer surplus: Defined as the difference between the price a consumer is willing to pay & what he actually pays

For example I’m willing to offer up to RM 200 for a good Economics textbook. But this book called ‘Economics: A Complete Course for IGCSE’ written by Dan Moynihan was sold at MPH for at RM 119. As such my consumer surplus is RM200 – RM119 = RM 81

Generally consumer surplus measures the welfare or benefits we derive from the consumption of goods & services. The larger the portion, the greater the benefits or welfare or satisfaction

What determines the size of our consumer surplus?

(1) Power of firms. Normally, firms with monopoly market structure, will abuse their dominant position by charging exorbitantly. Assuming that the willingness to pay remain the same, increase in price of a good will reduce the size of the triangle or the gap between willingness to pay & price actually paid. Monopoly here could mean that the firm is the sole producer or perhaps owning market share greater than 25%. Companies in oligopoly market structure can also do the same if they behave collusively & act as if there is only ‘single pricing’ in the market

(2) Elasticity of demand. The more inelastic our demand for a good, the greater the benefits we derive out of it (PED <1). To me, my demand for Economics book are most of the time inelastic due to the nature of my profession & my understanding of the subject. That’s why I’m willing to pay for a high price to ‘work’ with a good book

(4) Size of shift in supply curve. The larger the rightward shift in supply curve, the greater will be the gap generated between willingness to pay & market price, thus increasing the benefits or welfare. It is true if we consider opposite direction. Elasticity of supply curve will influence the producer surplus but not consumer surplus

Students normally have very high PED (PED > 1) for academic textbooks. In other word, their willingness to pay is very low. That’s why publishers normally provide discounts for students up to 20%. But I argue that this is very much insufficient to encourage the take up rate given that their PED is crucially high e.g. could be PED = 6

Reasons for low consumer surplus among students (could be 0 or negative):

(1) Lack of interest & appreciation of the context in the subject

(2) Will dispose it anyway after a semester or two

Students’ consumer surplus could be zero if their demand is perfectly elastic. Here their willingness to pay & the actual price they paid is the same. In some cases, could be negative. For instance they value the book at RM 20, but since they were forced by lecturers to buy original version at RM100, then this is large negative consumer surplus of RM 80
Posted by Lawrence Low at 5:16 AM