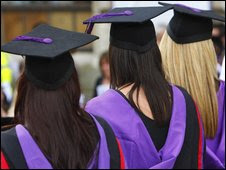 “Ministers are worried graduates could swell the ranks of the unemployed…..”
“Four top firms, including Barclays and Microsoft, will take on some of this year's 300,000 graduates”
“……the internships secured under the national scheme would last for three months”
Source of quotes: --BBC, 10th January 09--
What policy is this?

How likely is this in reducing unemployment?

(1) In short run. Assuming if there is no government intervention, probably majority of these graduates will remain as they were, struggling to look for a stable job by competing with those more experienced workers who probably demand for wages not much higher than them. Since government officials have held talk with large companies like Barclays & Microsoft, at least they are temporarily guaranteed a place to render their labour rather be part of the unemployment statistic

(2) In long run. Assuming these graduates are competent, probably they will be offered permanent positions. Furthermore which companies that doesn’t want to keep good people at reasonably low wage? One could also argue that by having experience working in household brand companies such as Microsoft, will boost their resume when they applied for another job

(1) De-multiplier effect is just too strong. As explained in much earlier posting, unemployment effect can snowball & months after months we will see quotes like “unemployment in December at 11 years high” & probably “18 years high” a month later. 300, 000 workers absorbed into labour market is not sufficient to offset the snowballing effect. Often this is being used as a tool by politicians to temporarily masked the real unemployment situation in UK

(2) Worsening frictional unemployment. In reality, it is very unlikely that many of the 300, 000 graduates will be retained. Business activities are slowing down markedly. There is no point maintaining redundant workers. Firms are now desperate to cut costs to offset the falling sales revenue, so that they can still make out of it. Workers retrenched after 3 months will then look around for their second job. However, given the current economic tsunami, they will likely take longer period to successfully engage one. This is said to worsen the frictional unemployment

(3) Not marketable enough. What can an average graduates learn in 3 months? Furthermore slower business transactions also mean lesser things to do & lesser skills to learn. This definitely will not be a plus point for them to easily secure another new job if their labour service is unwanted