How Effective Is Quantitative Easing In Both US & UK? 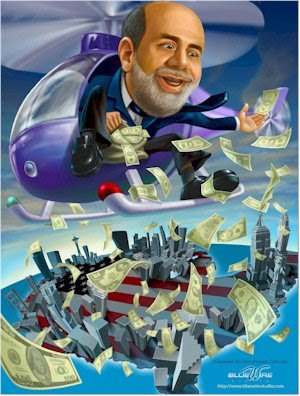 Quantitative easing. When Central Bank buys securities, government debts, mortgage-backed securities etc to increase the money supply in banking system so that they can resume lending as usual

(1) Credit crunch. This is not a common sight in the advance money markets in US, UK & many other parts of the Western economies, not until recently. It is a phenomenon where borrowers which can be made up of consumers or firms find great difficulty in securing loans. Banks have been more frugal in lending due to the ballooning number of defaults from homeowners & bankruptcies from firms. Despite moves by central banks like the Fed or even Bank of England cutting short term interest rates to 0% & 1.5% respectively, banks are still highly stubborn in passing on the rate cut

The prime reason is to recapitalise by maintaining an attractive interest rate to attract depositors. Some notoriously increase the credit card charge. All as an excuse to replenish their balance sheet

There is also a momentarily period where the 3 month LIBOR (London Interbank Offered Rate) increase. This is the rate where banks charged when they lend to each other in the wholesale money markets. In fact this could be a better indicator of lending rather than the base rates. In normal circumstance, fall in key interest rates will be followed by a fall in 3-month LIBOR (look at diagram). But since credit crunch, banks are more reluctant to lend to each other, causing a shortage of funds & this raise interest rates. As such fall in key rates which was supposed to boost lending had been offset by the increase in LIBOR. I argue that the problem of tightening credit is self-perpetuated by the ‘short-sightedness’ of those banks

(2) End of traditional tool. Here we refer specifically to monetary policy. It is a policy to influence the movement of AD or spending into the economy by manipulating the level of interest rates. In the period of rising inflation, interest rates can be raised indefinitely to curb spending. However in the current period of rapid deflation, interest rates can’t be reduced to below 0%
In US, interest rate is already at 0%, while in UK is now at 1.5% Although UK still has some room for further cut in rates, it’ll soon be running out of ammo. Perhaps in the next 2 meetings. At the moment, consumer confidence is really weak. I don’t see any possibility for both these large economies to turn around soon, not even when the rates are 0%. This has created a situation called liquidity trap. Japan should be a good proxy. Interest rates were at historical low level of 0% for years, & yet it fails to inflate the economy
Will quantitative easing (QE) works?
Yes
In theory, this should work. Quantitative easing is often suggested as a secondary tool to counter liquidity trap. Bank of Japan had attempted this in 2001 to prevent deflationary scare. Buying up securities & government bonds will increase the money supply or reserves in commercial banks so that they can resume lending as usual. Arguably this should be a better tool than the traditional rate cut, since the main problem is banks’ liquidity rather than costs of borrowing itself

(1) Consumer confidence. As imply by the term lending & borrowing, it shows that for spending to take place in economy, banks must be willing to lend & people or firms must be willing to take financing. However, daily news of job losses, unemployment at record level both in UK & US or even famous firms which went under administration are good enough to create a stigma among borrowers. Who dares to take up large credit commitment when they aren’t sure if they can still hold on to their jobs? Which firms will expand their operations in such period? Therefore, collapse in C & I may undermine the effectiveness of quantitative easing

(2) Could be overdose. There is even a possibility that if QE does work through, US & UK economy will be ‘over-cured’. If there is even a slightest mistake e.g. miscalculations, wrong timing, pumping in too much liquidity etc, money supply will increase dramatically & this may create a spiraling inflation. It could be an ugly one-hyperinflation which we witness during the period France Revolution, Weimar Republic & the current one in Zimbabwe. With QE stance, it shows that monetary committees place higher priority on economic growth rather than the threat of inflation. In hyperinflation, many things may happen e.g. paying salary twice a day, daily menu costs rather than annual, more empty shelves etc

(3) Lack of experience. US & UK had underwent through series of economic slowdown both big & small ones e.g. Great Depression 1929, October 1987 crash, Enron accounting scandal, September 11th terrorist attack etc. To great extent, many of these problems have similarities in nature, but what we are facing now is a new type of contagious ‘disease’ which fast spread to whole economic system. Banks have never been so short in cash, government had never announced such large fiscal stimulus, unexpected collapse of Freddie Mac & Fannie Mae and Lehman Brothers, AIG which nearly went under etc. Quantitative easing is rather new to policymakers in Western economies. Furthermore, learning from Japan experience, they should know that this have a chance of not working out

(4) Still need fiscal policy. Even if it does work, it may take ages before people & firms realised that prices of assets have finally rock bottomed. By then, unemployment could have surpassed the level we last seen in Great Depression & much damage has been done. Therefore, QE & fiscal spending could necessary be complement to jump start the economy. Large scale public spending into economy has effect on both AD & AS. Obama has announced his plan to transform public buildings to be more energy-efficient, increase broadband access, repair roads & bridges etc. All these are meant to absorb retrenched people into employment which may induce spending at later stage

In a Liquidity Trap although Saving (S) is abnormally high investment (I) is next to 0.

Hence, the Keynesian paradigm I = S is not verified.

The purpose of Quantitative Easing being to lower the yield on long-term savings and increase liquidity it doesn't create $1 of investment.

In a Liquidity Trap the last thing the Market needs is liquidity.

Those purchases maintain the demand for long-term asset in an unstable equilibrium.

When this desequilibrium resolves the Market turns chaotic.

This and other issues are explored in my tract:

A Specific Application of Employment, Interest and Money
Plea for a New World Economic Order

This tract makes a critical analysis of credit based, free market economy, Capitalism, and proves that its dysfunctions are the result of the existence of credit.

It shows that income / wealth disparity, cause and consequence of credit and of the level of long-term interest-rates, is the first order hidden variable, possibly the only one, of economic development.

It solves most of the puzzles of macro economy: among which Unemployment, Business Cycles, Under Development, Trade Deficits, International Division of Labour, Stagflation, Greenspan Conundrum, Deflation and Keynes' Liquidity Trap...

It shows that no fiscal or monetary policy, including the barbaric Quantitative Easing will get us out of depression.

A Credit Free, Free Market Economy will correct all of those dysfunctions.


The alternative would be, on the long run, to wait for the physical destruction (through war or rust) of most of our productive assets. It will be at a cost none of us can afford to pay.

In This Age of Turbulence People Want an Exit Strategy Out of Credit,

An Adventure in a New World Economic Order.


A Specific Application of Employment, Interest and Money [For Economists].

Hi, thanks for the information. It's great having a chance to exchange idea with you.