How Can Simple Theory Like Total Revenue (TR) Explain About Businesses?

Every single economic theories & tools that we learn, can actually be used to analyse real life situations. Think about this. In textbook, we were taught:

Then you may start wondering, to what extent is this simple formula applicable in explaining businesses?

(1) Plan strategy to achieve targeted revenue. It is mostly desirable to achieve high sales revenue by increasing both P & Q. However, not all businesses are able to do so given that P & Q are often inversely related (law of demand). Furthermore, most businesses out there are facing stiff price competition domestically & internationally. Since there is great difficulty to adjust price upward, it makes sense for companies to concentrate on non-pricing strategy such as advertisement on unique feature of products, free trial, after sales service, loyalty card etc to magnify Q. These strategy works perfectly well for Tesco & Walmart. Despite selling cheap goods, they still chunk high revenue due to high inventory turnover 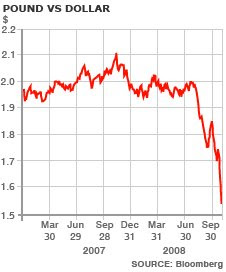 Source of diagram: BBC
(2) Explain phenomenon. I came across an interesting article on McDonald’s revenue. It was reported that although sales had increased about 7.6% in Europe & 10% respectively in Middle East, Asia & Africa, total revenue generated somehow fell from $5.75 billion (2007) to $5.57 billion (2008). How could that be? Isn’t it increase in sales means increase in revenue, as given by the mathematical formula?

The reason is simple. In 2008 itself, dollar has strengthened against many other major currencies such as Euro, sterling, renminbi etc. Although the total revenue say, in UK had increased it was somehow offset by the rising strength of dollar. It means every conversion of £1, we get lesser dollar.

Consider the example (refer the exchange rate above):

Although sales had increased 20% to 1.2 million, still total revenue had fallen when overseas earnings are transferred back into dollars
(3) Revenue maximisation. The theory was put forward by William Baumol (1959). According to him, conflict of interests actually exists between the managers (people who run the companies) & shareholders (people who own the companies). For managers, they may be looking towards revenue maximisation as their primary goal since their salaries, perks & benefits such as luxury vacation are closely related to total sales revenue rather than bottom line profits. Revenue maximisation does not necessarily translate to profit maximisation as the latter needs to incorporate costs. Interestingly, shareholders desire profit maximisation as their dividend payments from owning the shares depends on how much profits posted by the company
Posted by Lawrence Low at 6:05 AM