What Will Happen To UK Economy Which Is Near To Full Employment?

Definition: A situation which all available labor resources are being used up in the most efficient way 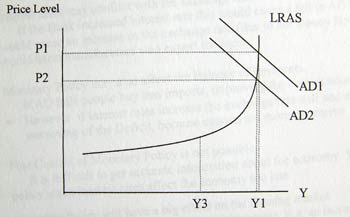 Impact of full employment in an economy:

(2) Demand-pull inflation. When everyone who is eligible to be in the workforce is employed, this will greatly influence the spending into the economy. As private consumption increase, AD will be pushed further right. Since the economy is near full employment, it will just create greater inflationary pressure in the economy

(3) Cost-push inflation. As we move from left to right along AS curve, more & more resources in this case, labour are employed. As labour sources are getting scarce, firms will be competing for them by offering higher wages. This will be reflected in the higher costs of production. Hence cost push inflation is said to happen then

(4) Worsening current account deficit. UK people have high marginal propensity to import (MPM), that is high tendency to consume imported goods whenever there is an increase in disposable income. For an economy that is experiencing full employment, there will be even more demand for overseas goods, thus worsening the trade deficit in goods. As in UK case, although there is a significant increase in surplus of trade in services, still it is insufficient to offset the former. Overall, current account will be worsen & UK government will need to work harder to attract large capital inflow to offset this

(5) Reduced incentives for those already in labor market. Stiff competition for scarce manpower may inevitably force firms to pay higher wages even to new inexperienced workers. To some extent this may narrow down the wage gap with existing workers who are more experienced. Realising this, there could be disincentive for them to continue working hard
(6) Environmental impact. More forests will be cleared off to give way to rise of physical capital such as buildings & factories. This will lead to various problems associated with the ecosystem. Also rapid & highly concentrated industrialisation in some areas will cause not only congestions but also the release of more pollutants

(7) Raise in interest rates. Monetary Policy Committee (MPC) will not hesitate to increase the interest rates continuously to further curb inflationary pressure that could stem from both demand-pull & cost-push. This could be hazardous to property owner, especially those who are on variable rate mortgages. We may witness high level of defaults & this could have repercussion onto the financial system itself
Posted by Lawrence Low at 5:39 AM