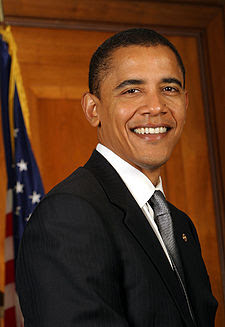 (a) Became the first ever, African-American to be elected as the President of United States
(b) Represents the Democrat
(c) At 47 years old, he defeated the much more senior candidate from Republican, John McCain at 72 years of age
(d) Graduate from Columbia University & Harvard Law School

(1) Negotiations with troubled countries. Discussions with Iran could be a tough one. Under the current Iranian leadership, there is no sign that they will halt their uranium development programme anytime in the near future. Meantime Russia is continuously opposing US’ idea to place missile defence system in Poland & the installation of radar in Czech Republic. They argued that this technology could later be manipulated to spy on Russia. Will Obama called that off? Or will he just slow down the process?

Will Obama be able to bridge the gap between Israel & Palestin sealed through an agreement? Lastly, how will Obama rebuild the tie with North Korea which is also due to nuclear warfare issue? No doubt, US has taken N. Korea out from its blacklist but I couldn’t deny the possibility that N. Korea will still be placed under strict controls. It is argued that they still possess the technology & expertise to redevelop those nuclear weapons

(2) Dealing with 2 wars. In his speech, he without fail had mentioned repeatedly that he will withdraw US troops from Iraq within 16 months. But the thing is, will he be able to fulfill his promise? Interestingly, on the other hand he will send more troops into Afghanistan to combat terrorism towering through the borders of Pakistan with or without Pakistan’s consent. Will that provoke Pakistan or even causing more unwanted terrorist threat on US?

(3) Stability in financial system. The chaotic banking panics we last seen in September & October may have been avoided. We no longer hear news regarding large insurance companies at the edge of bankruptcy or any big banks being nationalised. However, if his economic policies fail to lift US out of recession in the nearest period, there will be more people being unemployed. Soon, the repercussion will be magnified by the negative multiplier effect. There will be more defaults. More banks will be at their knees

(4) Possibility of economic collapse. Federal rates had been slashed to one of its lowest level, 1%. Meanwhile, US National Debt is standing at about 70% of its GDP. This proves that there is not much space here for economic maneuver. How low can the interest rates go? How much can the US government borrow? History has proven that if the people have lost confidence with the economy, no matter how large is the interest rate cut; still people will not begin to spend into economy. Japan will be a good example. Meanwhile, National Debt is expected to increase in near future to a level that US may soon default.

There are 4 main arguments here. First, in the period of recession, government will always run a budget deficit. Second, growing costs of Medicare & Medicaid. 3rd is the ability to meet the pension obligations of those baby boomer generations by year 2018. Fourth, more debts will be issued to cover losses in financial institutions
(5) Unstable dollar. Despite the value of dollar has been rising against many other major currencies such as the pound & euro, many economists feel that it is very unstable. First, the ever lasting current account deficit. US has been importing more than it export. The large trade deficit here has been offset by the large inflow of capital from oil-rich countries & also emerging Asian economies. If they lost confidence with US economy, probably they will demand lesser dollar, causing it to depreciate.

Also, ballooning national debt may mean that US will increasingly find it difficult to raise borrowing. This will inevitably pressurise the administration of Obama to increase money supply to deal with this. As supply of dollar increase, its value will fall

(6) Environmental issues. Obama has developed an ambitious plan to reduce US emissions of greenhouse gases to 80% below 1990 levels by 2050. He chose to adopt the market based cap & trade system. Here the pollution credits can be auctioned (remember we learn that in Unit 2, tradable permits?). He also pledged to collaborate with other large oil consuming nations such as Brasil, China, India, Mexico & South Africa to come up with an efficient method of reducing pollution. Also in his speech, he seems to be very interested in the upcoming global crisis & that is water shortage. So, how will he undertake his words? We’ll find out
Posted by Lawrence Low at 11:28 AM