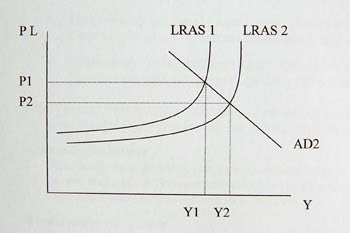 Definition: Supply side policies are policies instituted to influence the movement of AS by increasing the quality & quantity of the inputs of production

(1) Privatisation & deregulation. Privatisation is the transfer of state-owned business to private sector. The intention is to break up large state monopolies & create more competition. Once privatised, firms will have profit motive & this will induce them to adopt the most cost efficient method of production, thus resulting in lower price. Also by adopting efficient methods of production may significantly enhance productivity of workers. More output can be produced. Examples in UK include British Aerospace, British Airways, and British Telecom

Meanwhile, deregulation means allowing more competitors to set up business in an industry previously protected by legal barriers to entry. Competition would then hopefully drive prices down & force firms to be more efficient in production

(2) Education & training. Government must continuously allocate more grants to universities to encourage R&D. Courses taught in universities must also be reviewed from time to time to ensure it is relevant to industrial need. Besides, more courses that teach modern skills must be introduced. Since UK economy is moving away from industries that required manual skills to those that need mental skills, investment in education cannot be underestimated & retraining of those previously manual workers is absolutely vital

It should also be noted that by providing training to those who lose their job in old industry, should be able to increase occupational mobility of workers in UK economy, besides reducing structural unemployment. Having a knowledgeable & well-trained workforce can help to increase real output

(3) Trade union reform. Tough laws can be introduced to curb the power of labour unions to call for strikes, bargain for higher wages & any other actions that can disrupt the operations of a firm. Examples of measures taken are like requiring union members to cast a vote before strike, fining them if they disrupt production process & cause firms to lose revenue. By reforming the union, there will be lesser days lost due to strikes & firms will be more willing to hire. Output can be increased

(4) Reduction of state welfare benefits. When the unemployment benefits have been reduced, those unemployed will find that the opportunity costs of staying idle has increased. This will automatically force them to look for jobs. When there is greater employment in the economy, more output can be produced

(5) Lower tax. By lowering down the personal income tax, may provide an incentive for people to work harder or taking up a new job since they get to keep larger proportion of the money they earned. For firms, introduction of tax relief on R&D & lowering down of corporation tax may encourage them to increase their investment spending, thus coming out with better production techniques. This can lead to higher productivity & lowering down of production costs. There will be more output in the economy.

It also has many other benefits. Ireland & Estonia are 2 good examples of country inside EU that benefited greatly from corporate tax reduction, as its FDI surge dramatically

(6) Healthcare spending. When the government is committed to allocate a huge portion of funds under the annual budget to healthcare sector, it will increase its accessibility. In the near future, UK may have a healthier workforce. There will be lesser days taken off due to sickness, resulting in greater output in the economy

(7) Infrastructure spending. Improvements in the public transport, road conditions & having a world class airport can help to increase business transactions. For instance, having a road that is less congested can help people to reach the workplace earlier. More works could have been done. Also lorries that travel on less congested road may be able to increase its frequency of goods delivering. Overall, there will be more output in UK economy if all modes of transportation is efficient

(8) Reducing or dismantling minimum wage. If there is a minimum wage set above the equilibrium wage rate, then unemployment will be created. Minimum wage prevents some workers who are willing to take on low paid jobs from getting employed. Hence economist argued, by reducing NMW, there will be lower unemployment in the economy. Therefore, more output can be produced, resulting from higher level of employment

(9) Relaxation of immigration rules. Net migration into UK economy can affect both AD & AS. It affects AS in the way of greater number of labours & thus output in economy. It also affect AD by the way of greater spending into the economy & also greater tax collection for government

(10) Encouraging FDI. Increase in the number of foreign firms especially from Japan is good to local economy as they often bring along new technology & better management. Other than creating new jobs, both these can help to improve UK’s productive capacity. Furthermore UK has always been lagging behind its major rival like US, France & Germany in terms of capital spending

(11) Removal of trade barriers. By removing protectionist measures such as tariffs, taxes & import quota, domestic firms will be exposed to greater competition. This will automatically pressurised the local firms to be more cost efficient & adopting the best production techniques in order to survive. As a result, there will be more output in UK economy

(12) Lending support to small businesses. Supply side policies here include loan guarantees for new businesses, advice for new firms etc. Having greater number of small firms is advantageous as not only can it contribute to the increase in AD, but also it creates employment opportunities along the way as it grows. When more people are employed, generally there will be greater level of output in UK economy

(1) Focus on education & training. Most of the firms in UK have undergone privatisation, especially during the era of Mrs. Thatcher. As such there is not much space for further privatisation. Besides, some economists begin to question the wisdom of this policy since some firms like British Rail & British Energy went bankrupt. Also there is a danger of private monopoly exploiting consumers. Meanwhile the power of labour union has been under control & we have not seen strikes as in 1970s. The weakening manufacturing sector means the more insignificant roles play by them. As such the core focus by Labour government should be on improvement in the education system & setting up of more training centres

(2) Achieve UK macroeconomic objectives. The effect of supply side policies is overwhelming. Curbing the power of trade union can help to keep wage inflation low, thus slowing down cost-push inflation. Besides, firms are more willing to offer employment once the labour market is more flexible e.g. easy to hire & fire workers. Also, once UK has achieve higher level of price competitiveness, there will be an increase in export thus narrowing the current account deficit under the Balance of Payment

(3) Failure of supply side policies. Despite concerted efforts by the Labour government to increase productivity of workforce, still UK is lagging behind major rivals like US, France & Germany. Also there is a sharp rise in Balance of Payments deficit, especially in trade in goods. In other word, the problem of losing competitiveness still persists, possibly suggesting the failure of its implementation

(4) Tax reduction will not work. Lower income tax & corporation tax may not even increase the incentive to work harder & produce more, if the tax reduction is minimal. Furthermore, over the years more new taxes have been introduced & this is counter productive. However, one can always argue that lower taxes will benefit government more since people & firms have less incentive to evade taxes

(5) Greater inequality. Definitely weaker labour union is good news for industrial operators, but not all the time for employees. Some large firms may exert their monopsony power over employees by paying low wages, low increment, poor benefits etc. Dismantling or reduction of NMW can be equally a bad idea. Without it, the purchasing power of those with decent wages will be eroded by inflation. Therefore both lead to greater inequality. Also it is argued that jobless people will have even lower incentives to look for jobs

(6) Problems with immigrants. Large inflow of immigrants will depress wages, as supply of labour could be more than demand for labor. Besides they could have problems in communicating English & not all of them are skilled workers. This will then cause structural unemployment. Also even if they are hired, they may not even boost AD through consumption since they are likely to send high % of their earnings back to home country

(7) Comparison with demand management policies. Supply side policies are more effective than fiscal & monetary policy. This is because we can produce more output, thus achieving higher economic growth without actually causing any inflationary pressure onto the economy. Unlike the latter 2, very often economic growth is attained at the expense of higher inflation. Situation will be worse if the economy is near to full employment
Posted by Lawrence Low at 10:00 PM