Should US Government Consider Bailing Out The 'Beg 3'? 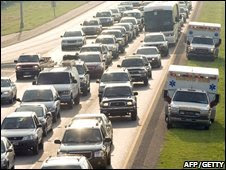 (1) Prevent worsening unemployment. Jobless rate in US had climbed to 6.5% in October, the highest rate last seen in 1994 (14 years high). In that month itself, total number of people being retrenched hit 240, 000. Overall, for the first 10 month 1.2 million Americans had lost their jobs. Here the ‘Big 3’ considering GM, Chrysler & Ford employ more than half million people.

If US Treasury decides to reject their begging bowl, very likely unemployment will be exacerbated in 2009 to a level of 10%. Don’t forget, there are many industries that are directly related to the auto industries particularly the supplier of car components. People working in that industry will be affected too. Soon the negative multiplier effect will feed into the whole economy

(2) Exacerbating recession. News of unemployment often serves as headlines these days & it creates trauma among working people. Yahoo had just decided to cut 10% of its workforce. HSBC that day had cut 450 employments. Citigroup will slash up to 75, 000 employment worldwide. Today (21st Nov) Rolls Royce just announced about its plan to slash 2000 jobs

As people loss confidence due to job insecurity, they will not be ready to make commitment by purchasing huge items on credit such as cars, properties, plasma TV etc. Also in such period, people expect price to continuously fall (period of deflation), causing them to defer spending. As private consumption falls, recession will be worsened. Great Depression in 1929 & Japan’s Depression in 1990s should be a good example

(3) Stock market panic. As Congress strongly rejects the proposed $25 billion bailout, investors grow panic. This result in heavy selling of shares across Wall Street sending Dow Jones below 8000 points, especially the shares of the Big 3. People no longer interested to hold stocks of companies that are on the verge of bankruptcy. The spillover effect is tremendous as it affects stock market across emerging economies too

(4) Bank tighten loans. With the fear of another credit crisis, now banks have been much frugal in lending. Number of loans approved dropped significantly. They refuse to extend loan even to people who are buying car. This causes the demand for car to fall & therefore a drop in the revenue of automakers. This even hurt more of its balance sheet. Also they refuse to give funds for Big 3 to finance their restructurings

(5) Equity. The US government had previously bailed ‘undeserving’ financial institutions which are largely accountable for all the mess today. So why not just bail the Big 3? Besides, it is not those blue collar workers in Detroit that contribute to the credit crunch

Arguments not to bail

(1) Free market argument. From the point of free market, the Big 3 should be left on their own. There should be no government intervention in whatever way. Furthermore economists argue that the period of difficulty is the best way to distinguish between the performers & the non-performers

(2) Moral hazard. If aid is given easily, very likely these car firms will not struggle to come out with something innovative e.g. competitive models compared to Japanese rivals or fuel efficient cars. Also they may not even have incentive to lower down production costs. Therefore the same problem will persist in near future. This is likely true since costs of production for automakers have been remaining stubbornly high all this while. The possible explanations are superb healthcare benefits given & ridiculous high salary to its workers

(3) Firms, shareholders & unions responsibility. There are many parties that we can put the blame on. The public condemns the poor management ability, for producing models of cars which are inferior compared to rivals, for producing cars which are not fuel efficient (big & bulky SUV) when oil prices are rising & lastly for signing expensive contracts with unions that it cannot afford. Also they have been bashed yesterday (21st Nov) as they flew to Washington with their begging bowl in a flight that costs $ 20, 000 when they can actually take $288 economy flight ticket.
Possibly, $25 billion given could be misused to sustain the lavish lifestyle of those top managements & paying themselves fat bonuses rather than pumping into business. Shareholdersought to be criticised for allowing the management to do so all this while. Unions must share the blame since they have made ridiculous demand for themselves, hence significantly increase the production costs of auto companies
(4) Problems even before bailing out. The car companies have been loss-making most of the time, even in the period of economic boom. For instance, GM’s operation in Europe has not been profitable for 4 years continuously, since 1999. In US, it had made losses amounting up to $12 billion in 2005 & 2006. As such by giving in the $ 25 billion, very likely it will not be sufficient to sustain their large overhead costs. In fact they have been given a $25 billion earlier this year

(5) Where is the line? There must be a limit, to which extent the US government can assist. If it decides to rescue the US auto industry, other industries which are loss making will think that the government is doing charity. As such they will not have the incentive to be more efficient, thereby turning to the government whenever they face difficulty
(6) Let the employment pattern change. It is argued that this transition, although is painful in the short run, but will not hurt the US economy in long run. For instance, UK once employed many people to work in manufacturing sector. But as Britain is losing her competitiveness due to appreciating pound, cheaper goods from emerging economies etc, more & more people leave this sector & join services sector. It does not take a genius to see that UK economy still prosper after that.

Also UK car industry is getting more insignificant nowadays compared to last time, but it does not spell an end to UK economy
(7) Pressure to other governments. While US is still weighing whether to assist the Big 3 or not, auto companies from the developed economies have already begin lobbying & pressuring their government to do the same in whatever way. If the bailout does materialise, these car makers will definitely argue as in why the US government is able to assist, but not their official? For instance, car manufacturers in EU are now lobbying for € 40 billion euros loan. Meanwhile, carmakers in Britain wanted more tax cuts which could potentially lead to worsening fiscal deficit
Posted by Lawrence Low at 10:53 AM