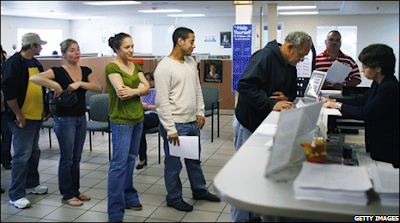 People registering themselves at JobCentres
Unemployment: People who are in the working age (16-65) & economically active, but couldn’t find a job despite active search for it

However, unemployment may not be as simple as it seems. In fact we do have a branch of economics called Labour Economics (Unit 5A) but unfortunately Edexcel scrapping it soon. Final exam will be in June 2009

(1) Frictional unemployment. Time taken for individuals to move in between jobs. Suppose Mr. A has been out of job for several months & as such he is looking for a new one. In between, he registered himself as unemployed & entitled himself to claim jobseeker’s allowance. Sometimes, ‘the dole’ could act as a strong disincentive for someone to look for job if the claim is high. Also sometimes they took longer than necessarily to look for jobs, is due to imperfect information, not knowing which local firms that offer vacancies. Both these actually worsen the frictional unemployment

Solution: Like UK, they have set up JobCentres, a government-funded agency (something like Jobstreet in Malaysia) that helps people to look for suitable employment & firms to fill in vacancies. Also the government can cut unemployment benefits, to increase the opportunity costs of staying idle

(2) Cyclical unemployment. Also known as Keynesian unemployment. Closely associated with economic growth. Like now, the period of recession, clearly businesses no longer need so many workers since the demand for their goods & services had fallen.

Solution: Government has to increase public spending & reduce taxes. Increase in G will jump-start the economy since it’s part of the component of AD. Hopefully through the multiplier effect, will lead to a secondary increase in AD. Cut in direct tax will induce more people into work since it increase the level of disposable income

(3) Structural unemployment. Unemployment that results due to mismatch of skills. The problem is these workers are just too specialised & they may find difficulty to move in between jobs. For instance, a welder is displaced by a robot or a nuclear engineer is no longer required in a lab.

Solutions: Government provides incentives to firms to train these employees to make them more marketable for other jobs & also incentives for those unemployed to join the training scheme

(4) Geographical unemployment. Unemployment caused by difficulty to move from an area with low demand to areas with high demand for labour. This is often caused by social factors like family ties, cost of living etc

Solutions: Government can consider giving incentives to firms e.g. tax breaks, investment tax credit etc to set up businesses in areas with high unemployment. Also, they can actually reduce barriers to free movement. Notably, EU has reduced the border controls thereby enabling workers from e.g. Hungary to come in easily & work in UK. However, there could be other barriers like language

(5) Real wage unemployment. Unemployment that is caused due to high wages in the economy. It could be caused by any of the combinations such as strong trade unions, wage rigidity & minimum wage. Strong trade unions can cripple the whole economy. UAW (United Auto Workers) is a good example of how a union nearly destroyed the Big 3 & subsequently put US in the mercy of Japanese & Chinese (to buy their bonds). They often ask for wages that are absurd even in period of difficulty like now. Secondly, there are some wages that could be difficult to be adjusted downwards, e.g. workers with long term contract. Lastly, high NMW (national minimum wage) can lead to unemployment as firms will demand for lesser workers if per hour pay is high

Solutions: The US government can follow the stance adopted by Margaret Thatcher in paralysing the strong labour union. However it is very politically unpopular
Posted by Lawrence Low at 12:29 AM

the way u described about unemployment and its solutions is simply superb. excellent description sir.,

Can I know what government of Malaysia has done to reduce the unemployment rate in Malaysia?

very helpful for my exam tomorrow, thanks

I just loved the way you explained and presented about unemployment. Thank you for sharing your knowledge among us.
Types of Unemployment