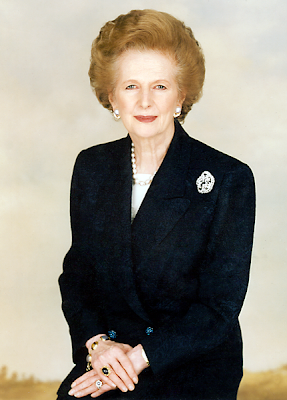 Margaret Thatcher became the very first lady Prime Minister in UK & yet the longest serving from 1979-1990. Her administration was one of the most interesting one in the history of UK economics as it led to many changes, some for the good & some bad. She is also known as the ‘Iron Lady’ due to her tough-talking rhetoric

When she came to power, UK at that time had:

Thatcher’s political & economic philosophy is reduced state intervention, encouraging the working of free markets & entrepreneurialism. Also she is a Monetarist. In other word she believes that the only way to stop spiralling inflation is to reduce money supply. Only when everyone has problem of getting access to money, there will be less spending into the economy thus reducing consumption (C), the biggest component of AD. When AD shifts leftward, price level will fall thus easing the easing inflationary pressure that built up in UK economy that time

But many economists felt that her extreme deflationary stance was far too much for the economy. Deflationary stance here means raising interest rates, raising taxes & reducing government expenditure (tight monetary & fiscal policy). Consistent with the AD-AS diagram that we learn, tightening stance here successfully remove the inflationary pressure in UK economy. However, it is done at the expense of worsening unemployment

Many social problems arise from here, such as riots in Britain in 1981 as people are being jobless for some time. Extreme austerity measures & high unemployment later fed into the whole economy & create a devastating force called negative multiplier effect. It means an initial fall in AD that is followed by a secondary larger fall in AD. This is proven when the unemployment in UK reached as high as 3 million in 1986

As in the case of higher interest rates, pound continued to appreciate against other currencies. This caused UK to lose competitiveness because buying goods & services from UK will be more expensive. That time sterling stood against dollar at £1 to $2.50 from $1.50. The problem is exacerbated when sterling became some kind of petro-currency owing to the fact that UK does produce its own oil from the North Sea. As countries buy oil from UK, demand for pound will increase even more, thus putting immense pressure onto the competitiveness of manufacturing sector

UK therefore tasted the worst effect of its recession in 1981

Of course there are more to say regarding Mrs. Thatcher contribution to British economic efficiency. That is mainly through the supply side policies she introduced. Also in the coming posting I will write about the notorious Lawson Boom during her tenure
Posted by Lawrence Low at 6:51 PM