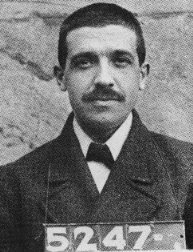 Charles Ponzi, in tribute of him 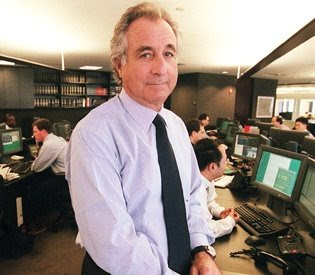 After a series of economic & financial shock from US, we were lambasted with another big news that swept across newspaper’s headline in the West. It is non-other than Bernard Madoff. This name could be alien to my fellow Economics students, but he is a well respected figure. His legacy of helping investors to consistently earn 11%-13% on top of their investment is no secret, even in times of turmoil. He is even been made the Chairman of Nasdaq

This man had a very humble beginning as a lifeguard & installing sprinklers. He started his company in 1960 with an initial $5,000 & then called it Bernard L. Madoff Investment Securities LLC. His reputation is so strong, that he had an ego of turning down some of the richest man that courted him for access to his miracle investment scheme

There are few things that amazed me:

(a) How does an ordinary lifeguard & sprinkler installer know so much about the working of the financial market, regulatory framework & its loopholes?

(b) How come his sons are not aware of their dad’s activities?

(c) US has the best & yet the most sophisticated financial market regulator called the SEC (Securities & Exchange Commission). How come it fails to detect the financial fraud much earlier & letting it operate for nearly 4 decades?

(d) Why are those big banks with world most talented brains & management such as Swiss Bank can be swayed into trusting the Ponzi scheme (in recognition of Charles Ponzi) & earning superior returns even in period of difficulty?

How does Ponzi scheme work?

It’s rather easy. There is no hassle to earn CFA (Chartered Financial Analyst) title or PhD in Finance, or becomes a well-known Wall Street figure. The organiser didn’t actually invest any of the money handed to him. What he did was, to use new depositors’ money to pay off the earlier depositors

Let’s consider a simple scenario of 26 investors, labeled A-Z. At first there will be 3 investors, called Mr. A, B & C. Then the organiser will fool Mr. D (which is very rich) in joining the scheme. Eventually, the money handed in by Mr. D will be used to pay off earlier investors (A, B & C) without actually investing it. Say in the end when Mr. X, Y & Z joined the scheme, the money they threw in will be used to pay the so called ‘profit’ made by investors A-W

However you may argue, in order for the scheme to work does it mean that Madoff has to continuously look for richer investors so that earlier investors can be paid off? My answer is not necessarily. If he successfully found one, it will be good as it means more cash in circulations. If not, it’s not a problem anyway. Why? Those investors at the earlier chain are probably driven by greater greed now. Greed dominates their rationale. In reality, most of them reinvest the paycheck they got hopefully they can earn more superior returns

In what circumstance the scheme will come to an end?

(1) Time to get out. Once the organiser feels that he had made a considerably fortune for himself, he will leave the game & disappeared with all those monies

(2) Outnumbered. If participants are increasing abnormally, the organiser could find great difficulty in paying off the existing ones. More time will be spent onto managing existing accounts, leaving him lesser time to lure new ‘victims’. At the end of the day, there will be lesser monies coming in & he may liquidity problem. Words of fraud may begin to spread. It works incredibly like multiplier effect. Later more investors will want to withdraw, causing tighter liquidity for him

(3) Regulators. If the scheme is so successful, he may attract regulators to probe him. Regulators will ask for accounts of transaction, something that he may not be able to provide. Surprisingly, Madoff escape this. Miracle isn’t it, after SEC letting this slip of from their hand?

(4) Credit crunch. The main reason why Mr. Madoff fails in the end is due to credit crunch itself. Due to period of difficulty more investors want their money back. After all, having cash in hand now is perceived the safest. Secondly, he fails to attract more people to join the scheme in current period. Third, even those big guns who want a shot, may find difficulty to get credit from banks. All these lead to shortage of cash & yet people who demanded their money back is on increasing scale. The scheme's life cycle has come to an end!

In Malaysian, we have similar scheme which was given the name ‘Pak Man Telo’. The one who organised it was called Osman Hamzah, a part time reporter in Perak. He started the scheme in 1972 & cheated nearly 50,000 investors with value of money at RM 99 million in hand that time.
Perhaps, he could have made much fortune just like Madoff if he operates in US or maybe even longer due to loopholes that exist.
Posted by Lawrence Low at 12:32 AM