Why Eurozone Will Be The Last To Exit Recession?

While US economy is still plagued by recession, there are tentative signs that situation begins to stabilise. In other word, the States economy will nosedive but at slower rate. The data released in past few weeks showed some stabilisation in house & commodity prices. Even the stock market is not that badly hit by the swine flu. On the other hand, firms ran down their inventories suggesting that consumers have begin to spend
Back in Asia, large economies like India & China are expected to experience a slowdown, not a contraction in 2009. With such a stronghold, other emerging economies within the region are expected to benefit from the multiplier effect of these two. Interestingly, PwC even predicted that in 2014, more than half of world’s GDP could s be accounted for by these high growth nations. Just imagine, how a recession like this can change the fortune of advanced economy

Conservative estimates showed that Russia could grow by 3.1% & Brasil 2.7%. In Mid East, growth of about 3% is expected (http://www.pwc.com/) for the year

Another area infest by worst-than-expected recession is EU. In fact there is large number of reasons that put EU economies especially euro in a great disposition. From economics point of view both theory & practice, ‘dead-lock’ recession in EU will be much longer than expected by many 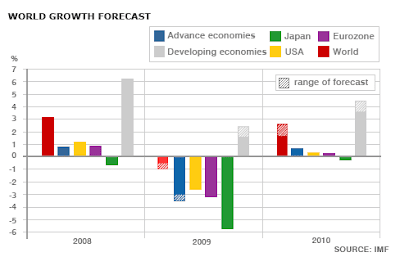 (1) Unemployment is higher than elsewhere. Jobless rate in the 27-nation EU is expected to hit 10.9% in 2010. Interestingly, if we only look at the unemployment rate in eurozone, it is estimated that the figure could be as high as 11.5%. Why such a trend? This is because unemployment is extremely high in places like Spain 17.4%, Ireland 11% & Germany 8.6%. These figures raised the average. It is not difficult to understand why.

(2) Conservative ECB. In UK, the targeted inflation rate is CPI 2% +/- 1%. This means UK places equal importance to growth & inflation. However ECB is said to strictly adhere to the 2% targeted rate which shows that it has high anti-inflationary bias at the expense of higher unemployment & slower growth. That explains why they are pretty hesitant to cut interest rates when major central banks around the world take such stance

Another relevant argument is all countries that adopt euro have lost their authority in setting interest rates. Leading economists felt that the current 1% interest rate is still high for some economies like Germany, France, Italy & Ireland. In short, all euro members can no longer manipulate the interest rate to give their economy a boost. A decision made by ECB may therefore be favourable to some but bad for many

(3) Strong euro. The third reason is related to second. In the absence of flexibility in labour market, the only way to cut costs & boost competitiveness is devaluation of pound. However, the Economic & Monetary Union removed the possibility of exchange rate adjustments to give euro products an artificial advantage. To make things worse, euro remains stubbornly high in recent months thus creating more problems to export-drive economy like Germany

(4) Fiscal constraint. Commitment to the Growth & Stability Pact is fatal in current period. According to the agreement, countries budget deficit must not exceed 3% of GDP in any fiscal year. Although some countries like Portugal, Belgium, France & Italy are well known for side-stepping it, nevertheless they are still tied to the commitment of bringing their national debt down in immediate future. Therefore, any signs of green shoots recovery are likely to be muted by the rise in tax

Ireland had announced in its emergency budget in April that Irish government will raise taxes & slash public spending. With such measure, personally I feel that the contraction will be larger than estimated 8% this year. That’s why we have heard of large scale stimulus by US, China & Japan but not Euro. Other problems are like issue of ageing population in Italy which will further place a constraint in its public finances. Tax revenues will shrink & government’s obligation on pension increase

(5) Overdependency on one sector. Euro economies are not well diversified. For instance, Germany places too much of importance onto its export sector. With the pace of fall in trade among EU members & dyeing appetite among American consumers, its manufacturing sector will be restless with rising jobless toll. Others like Spain & Ireland economy focused too much on construction sector. With falling mortgage approval & rising unemployment, prices of house is set to fall much deeper, triggering negative wealth effect

(6) Tentative sign of protectionism. With such depth of recession, some countries may desperately withdraw their operations from other member countries back to home. The aim is to create local employment. Nevertheless, this move is looked as form of protectionism which will just infuriate host countries. For instance, recently France was accused of shifting some of the Renault car production back to France suburbs from Slovenia. However European Commission will look into this to ensure that France comply with competition rules

(7) Weaker allies. Eastern European economies have borrowed more than $1.7 trillion abroad & to make things worse most of the obligations are short-term in nature. It must repay or roll over by $400 billion this year, equivalent to one-third of the region’s GDP. Most of it is owed to Greek, Belgian, Italy, Swedish & Austrian banks. Unfortunately, credit window has been shut. Western European economies are cutting aid onto these poorer EU states given their own financial problem. If these Eastern blocs were to collapse, it will trigger a devastating impact of several times the East Asian financial crisis in 1997/98.