Both fiscal & monetary policy are demand management tools. They are meant to influence the movement of aggregate demand (AD). To revive the present economy from recession, the UK government will have to increase public spending & slash taxes. Meanwhile Monetary Policy Committee (MPC) will resort to cutting interest rates 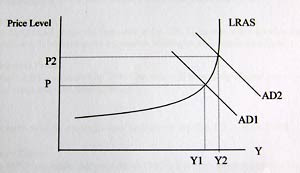 With lower interest rates, private consumption is set to increase. There are two reasons. First, fall in the costs of borrowing is likely to induce entrance into the property market since financing mortgage becomes much affordable. Also, low interest rates discourage the savings habit. Sterling is expected to weaken since many rich individuals & pension funds withdraw their money from UK & park elsewhere, say European banks. This is a good news for beleaguered manufacturers as their products gain some competitiveness. Exports will rise. Increase in both private consumption & exports will shift AD rightward, thus expanding the real economy

Rise in public spending say building of schools, hospitals, repairing roads & bridges will directly lead to an increase in AD since government expenditure is one of its component. Through the multiplier effect, an initial increase in injection will lead to a larger secondary increase in AD. For instance, just consider the impact of the construction of Heathrow Terminal 5. Thousands of jobs have been created & related industries such as producer of cement, steel, construction equipments benefited too. Real GDP will expand thus pulling UK out of deep recession

Lastly, with lower income tax working people will have greater amount of disposable income. They will therefore increase their spending into the economy. As for firms, lower corporation tax will increase post-tax profits. This will increase the incentive of firms to invest in new capital equipments & other forms of research. These two also have supply side effects. People will be more motivated to work with larger take-home pay & firms may make discovery on more cost-efficient techniques

However, the nature of the recession is very different this time. It is due to shortage of liquidity in the financial market. UK banks have made large losses in 2008 & therefore they are very reluctant to lend. While lower rates have created some interest to borrow, banks put condition such as requiring high deposit of 25% of value of property. As such house prices & confidence remain low. UK economy is expected to contract further

Large scale government spending may create crowding out effect. When government increase borrowing by issuing bonds, usually it is those private sectors which take up these paper assets. As a result, they have lesser money to invest. Having said so, one could argue that crowding out may not happen since government is just making good use of idle financial resources. Otherwise firms may not even bother to invest in such period

Third, while it is true that government usually slash direct taxes, at the same time they might impose other form of taxes like sin taxes. Alcoholic drinks & cigarettes are the common target. This has regressive effect especially onto the lower income people. This is because the spending onto these items as a percentage of their income will increase
Posted by Lawrence Low at 10:49 AM