Recently, President Obama has announced an ambitious first ever national standard for fuel efficiency & carbon emission target, something he called as ‘historic’. According to the underlying plan, US carmakers are expected to increase fuel efficiency by 5% annually from 2012 to 2016, emission reductions will be 34% by 2016 and consumption of oil will fall by 1.8 billion barrels throughout the life time of the cars sold in next 5 years 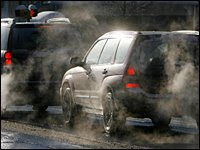 I have to agree with Mr. President, car manufacturers, consumers & environmentalists due to the following:

(1) Costs of driving go down. While it is true that Americans will have to pay a higher price for new cars by an approximate of $1300, somehow it will be offset by lower fuel cost. The payback period is around three years. With better mileage, one can reach a destination by paying less for fuel

(2) Less outflow of money. With more fuel efficient cars on the road, petrol consumption & demand will fall. US will need to import lesser oil from Saudi Arabia, Venezuela, Libya & Nigeria. There will be lesser outflow of money. US’ deficit in net oil trade as a percentage of GDP will get better. Current account deficit may also improve. The extra money that goes to pocket can be spent locally, thus boosting US economy. Also Americans can reconsider to kick start savings habit

(3) Cleaner environment. US is the biggest car market in the world. It has about 250 million cars & light lorries on the road. Hence, if the targeted reduction of 34% in carbon emission materialise, the impact onto slowing down the process of global warming is highly significant. It may also bear positive externalities onto other countries climate although the magnitude is questionable

(4) Provide competition to foreign carmakers. In terms of fuel efficiency, US automakers got to learn a lot from its European counterparts as well Asian manufacturers. The Big 3 have focused too much on safety features of the cars they make, hence all cars designed are big & bulky like the SUV. Japanese carmakers especially, have noticed long ago that Americans actually desire much fuel economy car in those days where pump prices are rising steeply. So they created models like Toyota Prius & hybrid versions of popular Honda models. Now, with new ruling hopefully Ford & GM will push themselves to be more competitive

(5) Encourage innovation. The targeted 5% annual fuel efficiency improvement will ensure US carmakers to continuously invest onto R&D. In the future, it is hoped that they can come out with much better green technology, innovative ways to cut production costs & be more efficient in other ways. This may also turn their fortune around & allow them to once again chunk in supernormal profits

(6) Single national standards. Operating with single standard nationwide is much better than two, shall California’s standard come into full force. Also, the costs of operating the two will be high with no additional benefits to environment, cause confusion & prevent time wastage in court battles

Despite all the applaud, I have more critics:

(1) Less effective. This fuel efficiency plan is considered less effective than gas taxes in reducing petrol consumption. This is because, the latter affect types of cars bought & choices of driving. In short, a big SUV is expected to very fuel consuming. But if combined with distance of travelling, motorists are expected to be ‘punished twice’. Therefore, under gas taxes people have the incentive to plan their journey. However with the new plan, demand for petrol is likely to increase since cost of travelling indirectly has fallen. At the end of the day, fuel emissions will not be reduced

(2) Hidden costs. This leads us to second argument. When one travels more often, there are other non-petrol costs to be considered such as costs of maintaining the car. Cars that travel intensively will definitely be sent in to workshop more often, changing of tires etc. So the claim of cost saving throughout the lifetime of the vehicle is highly questionable

(3) Counter productive. Since the standards raise the price of new cars, it may create unintentional effect of keeping older, dirtier & less fuel efficient cars on the road longer. What about companies? Keeping old light lorries is counter supply side measure in a way that there will be lower level of investment into the economy. It may break down more often thus disrupting the timely delivery of goods

(4) Affecting other economies. US is the largest consumer of oil. As said earlier, if the plan materialise, demand for fuel will fall & this may send crude oil prices down, thus reducing the profitability of oil exporting nations. This could be very detrimental to some like Iran & Nigeria since their economies are not well diversified. Furthermore, within the short run of 7 years, it is quite difficult for them to discover an area where they may comparative advantage & start to build strength on it. Having said so, some may also argue that they could cut oil supply to maintain oil at high price

(5) Falling contestability. In the next few years, the US auto industry will becoming increasingly uncontestable. In other word, the barriers of entry & exit will be very high. Theoretically, new comers will have to invest heavily on green technology & yet there is no guarantee that they will be successful in getting a foothold in US auto market. In this case, we may refer to Chinese carmaker, Chery which yet to have reputation in this area

(6) No match to foreign cars. US automakers are still at infancy stage if to compare with firms like Honda & Toyota which have long established themselves as more fuel-economy carmakers. By the time US reach 39 miles per gallon in 2016, probably the Japanese car firms would be laughing with their models that travel at 50 miles per gallon. So, how to compete?

(7) Inferior quality. One of the features that will definitely reduce amount of petrol consumption in new cars would be to produce underpowered, smaller cars & probably with lesser steel content so that it can become lighter. If this is the case, then better mileage is achieved at the expense of safety of the motorists. Also smaller trucks can be highly inefficient since it will not be able to transport much weight of goods. So it will end up with more trucks carrying similar quantity of goods
Posted by Lawrence Low at 9:50 PM