The World's PPF Shifting Inward Due To Recession

Production possibility frontier (PPF) is curve that (typically) shows the combination of two goods that can be produced within an economy if all resources such as land, labour & capital are fully & efficiently utilised. Based on this definition, therefore PPF is also the aggregate supply (AS) curve

In the period of recession like now, many factors of production remain unutilized

(1) Land. Multinationals have decided to hold back the expansion of businesses or the building of new factories. Lands which were acquired earlier will be left idle, so long as the direction of the economy remains bleak. Other sectors like mining of steel, copper, coal & other metals will slow markedly in response to weakening industrialisation

(2) Labour. Many workers from the financial lines such as commercial & investment banking were laid-off as many of these banks went under administration while some undergone consolidations. Real estate agents are not spared either due to the bust in housing market. People are not willing to take huge financial commitment like buying house in times of turbulence. Workers in manufacturing sector are badly hit too due to the weakening of global demand

The latest casualty will be the future of workers in tourism-related industry like hotel & airlines. While it is understood that the current unemployment is cyclical in nature, but it could easily turn into structural & long term in nature, as recession prolongs. Very often people take very long time to be reemployed. This is associated with hysteresis-where workers lose their skills, confidence & de-motivated which make it hard for them to land on future job

(3) Capital. Fall in factory orders will mean more capital equipments are not being used to optimal level. Spare capacity in the economy is said to have increased. This may raise the production costs of firms thus further reducing its profitability

Therefore, the output gap for most nations will widen as in the diagram below. It is defined as difference between actual & potential GDP (near or on PPF), quoted as a percentage of potential GDP 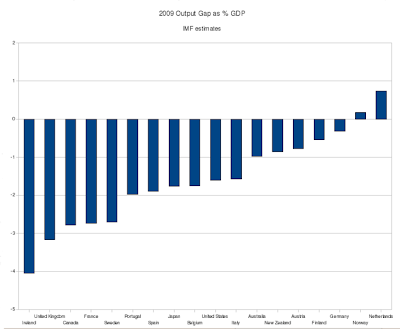 Many countries have therefore witnessed an inward shift of their PPF, one close to the frontier of PPF to a new point inside the curve
Posted by Lawrence Low at 8:43 AM