To What Extent Increase In Population Promotes Economic Development?

As the 21st century sets in, the world population was estimated to be at around 6.1 billion people. Projections by UN (United Nations) revealed that this figure will easily surpass 9.2 billion by 2050 & most of them will come from developing countries. The issue of ballooning population is not a new debate. It receives mixed blessings

Some countries like China used to encourage people to have lots of children in order to boost the country’s workforce. But in 1970s, it came to realise that the population growth rate would soon become unsustainable. Therefore, the one-child policy was implemented in 1979. On the other extreme, countries like Russia, US, UK & Japan would like to take immediate remedial steps to change its current demographic structure. Birth rates have fallen drastically. This too, will pave way to some other unimaginable problems 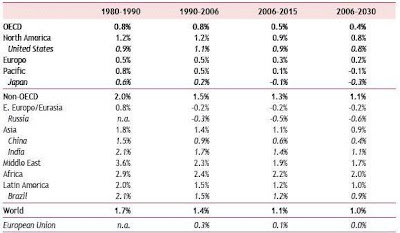 (1) Greater output. Increase in population will ensure a steady supply of workforce within a country. With rising number of people who fall into the working age category, there will be more goods & services produced. Higher economic growth can be achieved. As a matter of fact, East Asia’s economic miracle coincides with its population boom. It accounts for more than one-third of its growth

(2) Attract FDI. Multinational firms especially from the West are largely attracted to developing countries. There are just too many reasons, but all lead to one-lower production costs. Large number of population will almost ensure downward pressure on wages. Cost saving is magnified when we take into account than many of them are educated & they are willing to endure long working hours. Inflow of foreign investment will boost country’s economic growth

(3) Greater savings. Due to the first two factors discussed above, levels of savings within an economy will increase in line with rising number of workforce. Pools of funds in financial institution are important as a source of financing for both domestic & foreign firms. In some very populous countries like China, firms have reaped the benefits from high savings ratio. Raising capital domestically is never an issue

(4) Higher tax revenue. Larger number of workforce will provide government with more income tax revenue. In fact for most governments, this is the largest source of revenue. Secondly, rising population positively correlates with number of firms established. Firms are set up to tap into the broadening market for their products. This means more corporation tax revenue for government. Lastly, VAT (Value Added Tax) from goods also contributes to the tax base. All these are important to ensure sufficient funding for development projects like building of schools, modern healthcare facilities, improve road conditions from rural to urban etc.

(1) Malthus prophecy. Malthus presented his theory of population in 1798. According to him, population will increase geometrically while food expands arithmetically. If nothing is done to slow down the population growth, the nature would apply its own crude method to reduce population from its higher level. This is known as ‘positive checks’ by him which includes natural disaster, epidemics, earthquakes, drought, flood & natural calamities. Well, I feel that he has his point. Volcanic eruptions & Tsunami in Indonesia had taken many tolls. Epidemics like AIDS & drought in Africa have contributed to millions of death every year

(2) No development. If population growth outweighs economic growth, there will be no development. National income will be shared among more people. Income per capita will decrease, thus deteriorating the standard of living

(3) Unemployment. In many developing countries, it is common to witness people migrating from rural area to the urban. Despite providing large job opportunities, the modern secondary & tertiary sectors are unable to absorb all these migrants. Hence it is said that rural unemployment is replaced by urban unemployment. Having no money to return home, many will be stranded up in shanty towns in the midst of city. Sau Paulo, in Brasil & Bombay in India are well known for this

(5) Constraints onto scarce resource. Rising population is a sign of more desires to be fulfilled. There will be greater demand for oil to fuel economic activity, demand for steels creeping up in manufacturing & construction industry etc. It’s just a matter of time before these natural resources deplete. In the recent years, prices of commodities went up due to the strong demand from both China & India, two of the most populous countries in the world.

(6) Deforestation. It was estimated that 8 million hectares of forests are lost each year. More trees & animals will have to be victimised in order to pave way to rising population. These include the building of residential houses, offices, infrastructures etc. This has disturbed the atmospheric composition & worsening the event of global warming

(7) Civil unrest. There will be more conflict between states & areas due to the problem of overcrowding & fight for natural resources. People will also struggle to ensure their survival by fighting for the source of fresh water
Posted by Lawrence Low at 9:00 PM