Earlier this week, both Chancellor Alistair Darling & Gordon Brown faced one of the biggest mocks from David Cameron. Being accused by Conservatives for driving unemployment into the highest level & pushing UK into deeper recession wasn’t something unusual. Nonetheless, bringing out the issue of never-ending-borrowing & bulging deficit is almost certainly good enough to put the Labour to an end in the coming election. As evidence, David Cameron has stretched his poll lead over the Labour by 18% following the Budget

One of the hottest talk about is the higher than expected income tax rate on those earning beyond £150, 000. We will also see an increase in tax on tobacco & alcohol 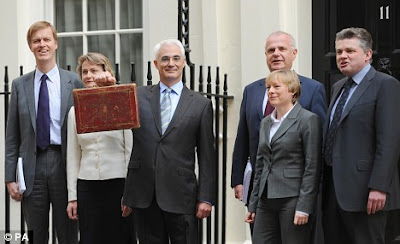 (1) A promise meant to be broken. In 2005, the Labour in its manifesto had pledged not to further raise income tax onto high earners. However, they first broke it last year when they announced that they new rate of income tax for the very rich Britons will be 45%. Again, they tore up a key New Labour election pledge by unveiling a new 50% income tax for the top 1% earners in UK in recent budget. These give the public an impression that the government is not trustworthy, especially among the rich. It’s also an effective weapon for Conservatives to attack the government

(2) Lower than expected tax revenue. Probably the current 40% is the optimal tax rate to maximise Treasury revenues from income tax on the rich, since it had stayed at that level for some time. Any attempt to go beyond that will cost Treasury revenue. The analysis can be understood using the Laffer curve analysis as below. This is because the rich will either fled UK or use accounting rules to avoid paying so much. Also, when the rich spend lesser in UK, it will hit other areas such as VAT receipts 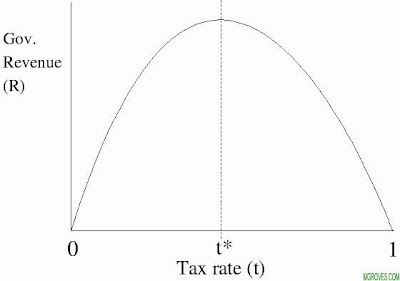 (3) Regressive effect. Higher tax such as 2p per liter of petrol, 7p on cigarettes & 1p on a pint of beer will certainly hit those low-middle income people as their total expenditure as a percentage of total income onto these items will increase. Look at it mathematically. Expenditure increases since these essential items are made less affordable & recession is followed by falling income. It may worsen income distribution

(4) Adverse supply side effects. Higher income tax reduces the incentive to work among the rich. It is meaningless to work harder, ending up with higher income & fall into higher tax bracket. It is a counter supply side measure

(5) Putting all families to poverty. The present & future government will have to incur several years of fiscal deficit amounting up to £530 billion (£175b this year, £140b, £118b, £97b in coming years). Government spending onto public services will have to be cut & it will hit those lower income people whether directly or indirectly. Also, not to forget that present borrowing will have to be financed by higher taxes in the future. Conservative estimates show that every UK family will have to fork an additional £2840 every year on income tax by 2017. Standard of living will definitely fall

(1) Balancing the budget. Despite painful, it is necessary to bring UK back into fiscal surplus, something that we can only dream off in near future. Even David Cameron mentioned that they will have to stick to 45% tax rate onto the rich if they come into power. Probably the biggest mistake of Labour is not bringing the deficit back to balance while UK enjoyed a period of high growth these years

(2) Source of revenue. The most traditional argument of all. Rise in taxes is necessary to enable government to carry out its duty to serve the public, paying out wages for workers in public sector, development projects & to avoid heavy borrowing somewhere in future

(3) Demerit goods argument. More expensive cigarettes & alcoholic drink is good to deter first timers from picking up these ‘unhealthy’ habits. The money spent onto these could be better spent elsewhere or save. However, some may argue that those who have picked up the habit will not change their consumption pattern since these goods are addictive
Posted by Lawrence Low at 12:34 AM