Why Price Of Tea Has Gone Up Recently? 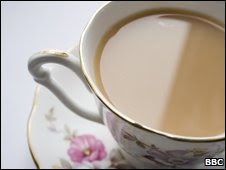 Source: BBC (prices of tea have soared)
Refer to this link:
http://news.bbc.co.uk/2/hi/business/7973857.stm
The reported increase in the price of tea can be explained using a simple & yet powerful demand-supply diagram

(1) Tea producers have probably cut production in 2008 given that there was surplus in 2007. In agriculture, farmers often make future decision based on the past. In this case, they expect 2008 to be in surplus too, which may lead to fall in price

(2) Kenya, India & Sri Lanka as the 3 largest tea producers in the world were hit by drought last year. As such supply of tea leaves fall

(1) Tea consumption reached 3.85 million tonnes last year, an increase of 4.8% from 2007 & global demand for tea consumption is expected to soar

Why British consumers may need to pay more?

(1) Any increase in crude oil prices which lead to an increase in transportation costs, will have to be passed on by teamakers

(2) Pound is weakening against dollar recently. As such, consumers in UK will have to pay even much more on top of the already-expensive price