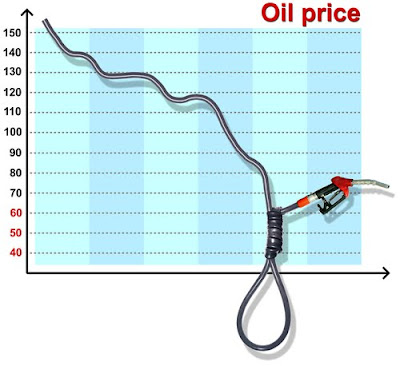 Perhaps the glorious days for Middle East are over-at least for the time being. Once, when oil prices were high, the mighty Saudi Arabia generated a billion dollars a day. Now, it has to contend with earnings around $700 million. That’s a collapse of 30% and considering the state of its economy which is not well-diversified, this is big money. Others like Oman and Bahrain felt the pinch more

We will consider the consequences both micro and macro

(1) Falling revenue. Since oil is a form of necessity with no close substitutes, it has inelastic price elasticity of demand (PED). As such, any fall in market price for oil will brutally hit their total revenue

(3) Difficult to increase output. Oil producing nations need to invest heavily on oil exploration, oil production facilities and R&D. Unfortunately, most of the funding is derived from oil revenue. With such a drastic collapse in oil prices, I’m uncertain if this will discourage oil companies from continuing the oil exploration process since the operating costs are very high too. If materialise, it is expected that oil supply in the near future may increase but at slower rate than demand. Given the supply of oil is inelastic, any increase in demand will quickly drive the oil price up and could be hazardous in a fragile economy

(4) Job losses. Governments in the region derive 75% to 95% of their income from oil exports. That shows that their economies are too dependent on oil and very thinly diversified at same time. There is no solid manufacturing or even services sector to back them up. As such, falling oil prices will begin to eat into employment and so oil engineers particularly will be the first to feel it. It has devastating effect considering the negative multiplier effect. In the end, an initial collapse in exports will bring private consumption and investment to its knee. More unemployment will result leading to even greater problems

(5) Shrinking economy. Simple AD-AS analysis. Collapse in oil exports, fall in investment rate and private consumption will mean that AD shifts leftward. As this happens, real GDP will shrink and therefore resulting in recession. Also, recession will usually lead to price deflation, a gruesome enemy. We have seen how the mechanics work on Japanese economy. However, one could also argue that this may not happen especially when the governments’ fiscal stimulus is effective enough to prevent the three components of AD from collapsing too much


(6) Fiscal deficit. Happens when government spending is in excess of what it earns from tax. In the current circumstance, fiscal deficit is almost inevitable since tax revenue from all sources like employment, corporate earnings, stamp duties, oil related etc fall. Simultaneously, the ambitious spending by some like Saudi Arabia and Dubai on construction projects and lucrative development projects aggravates. To balance the book, they definitely prefer oil prices to be higher than the current rate. Saudi Arabia and Kuwait while may face the danger of budget deficit, need not worry since these two have the biggest pile of cash reserves. It is those like Oman and Bahrain with smaller cash reserves and lower oil wealth which may face the spending wrath
Posted by Lawrence Low at 12:26 AM