The Nature Of Tuition Industry In Malaysia

Basically, we have four types of market structures and they are perfectly competitive market, monopoly, oligopoly and monopolistic. The first two are rather ideal as each was set at one of two extremes of spectrum. Firms in perfect competition are assumed to have infinite competition with identical products while monopoly no competition at all. From life experience, most of us can tell that most of the businesses out there actually lie in between these two

Think about this. Have you come across any food or magazine or hairdressers that are perfectly substitutable to one another? Don’t you think that you actually have some level of preference on one over another? Next, if a monopoly firm is reaping supernormal profits, it tends to attract the attention of some tycoons or smaller entrepreneurs which may have the thought of venturing into the same industry despite high entry barriers. The justification is benefits probably outweigh the costs in long term. Therefore, nowadays having single firm in an industry is a very rare occasion

(1) Many sellers and buyers. The sellers in this case will be the tuition centres which offer their service and students as the buyers. There are many of these two but not to the extreme as in perfect market. As such the industry is still very competitive

(2) Differentiated products. This is the main distinct from perfect market. Different tuition centres will offer different combination of subjects to be taken as full package, some may have additional subjects offered, the strength of academic staffs, ambience of classroom, a cafeteria in larger centres etc. The non-price features will give some space to these tuition centres to create the scope for brand loyalty e.g. not changing to other tuition centre

(3) Price maker. Monopolistic firms do have some price making ability. As such they have a downward sloping demand (AR) curve, but an elastic one. This is because the existence of many rivals. If the incumbent tuition centre tries to raise the price of fee say by 20%, it may lose 30% of its customers

(4) Very low entry and exit barriers. It doesn’t cost much to set up a centre. All the operator need is some tables and chairs, white boards with markers, paying monthly utilities and rental and probably a second-hand air conditioner. Besides, costs of recruiting teachers from schools nearby to teach part-time are not that high. This is because these teachers also realise that it is not easy to secure a tuition job outside given that they still have to compete with thousandths of other independent tuition provider. Therefore they hardly ask for higher fees

(5) Inefficient. Tuition fee is often above the marginal costs of providing the service (P > MC), hence leading to allocative inefficiency. Also, since the barriers of entry and exit are low, over the time more tuition centres will be set up. The industry is fast becoming saturated and spread of operating costs is becoming thinner among fewer students per centre. The operator will be unable to enjoy internal economies of scale and is therefore not being productive efficiency (MC = AC) 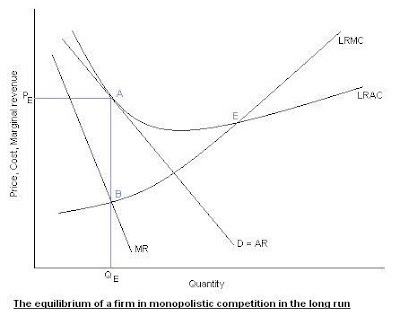 (6) Normal profits in long run. I will have to disagree with this last characteristic. However, it could be true only to some extent. As operators find it easy to enter and exit the industry, these people (normally teachers) will not hesitate to ‘try’ the market after observing some of their colleagues or friends made supernormal profits in short run. Due to the high growth of tuition centres, MC and AC will increase due to lower spread over of costs, while MR and AR decrease due to falling number of students. The combination of these two will yield normal profits in long run when AC = AR (tangential)

(1) Improving academic performance. This is the most fundamental argument. Students, who usually dedicate a greater portion of their time on revision and practising, tend to do better than those who don’t. In school, probably a student got to 10 sums to do. But in the tuition centre, they will be given more sums to practise on. It’s all about constant repetition. This is exactly the technique used by KUMON centre (from Japan) to train those very young to be capable of mental math

(2) Reduce revision time at home. The argument is, if one doesn’t spend time revising in tuition centre, he is going to do it at home anyway. So what’s the difference? Besides, the centre may have a better environment to study with television, computer and PSP far away from reach. Also there is someone for you to ask from

(3) Side incomes. This is the best part for all teachers. How much can a teacher earn solely depending on one job?

(4) Sharpening teaching skills. The teacher will probably be the biggest beneficiary. Again, constant repetition will lead to higher level of specialisation. Say, if someone taught about monopolistic in school or college then taught again at tuition centre, he would have sharpened his teaching skills on that particular topic e.g. able to explain better or catch students’ weaknesses

(5) Reducing social ills. Young ones are highly susceptible to pressure from peers. They easily engage in unhealthy habits such as wasting time and money in cyber cafes, loitering with no sense of direction and probably pick up bad drinking and smoking habits. Although putting them in tuition centres is not the best solution to problems among teenagers, at least it will help to curb some if not all

(1) Unable to get the best brain. Very often, the tuition operators are unwilling to pay a good salary to entice the best teachers and simultaneously, these teachers feel that they can earn much better by providing personal tuition. As such, teachers recruited may not be the best e.g. inexperience, jobless graduates or those who don’t even have basic degree. This will jeopardise the academic performance of students under his or her tutelage

(2) Not reported income. Most of the teachers do not report their income to IRB (HMRC in UK). As such there is a lost of tax revenue for the government. Also the size of GDP will be underestimated since the activity is more like another type of ‘informal’ economy. However, one could also argue that as it is highly insignificant as a percentage of GDP

(3) Reflection of poor teaching in schools. Ballooning number of tuition centres in Malaysia lately is an indicator of degradation of quality in our education system. There are numerous complaints about how some teachers in school skip classes, not giving any homework due to laziness to mark, ineffective delivery of lesson etc. This problem must be addressed if we desire to become an education hub in Asia

(4) Waste of parents’ money. Believe it or not, some Malaysian students view this as a trend. To secure themselves better grades in future, they request their parents to find them a tuition centre. Almost every single kid receives tuition nowadays

(5) Burdening students with more homework. Students already have enough homework from school. I don’t think they need much more. I knew a student who told me how she spends her whole night completing both school and assignment from tuitions. She takes six tuitions-Malay Language, Additional Math, Physics, Biology, Chemistry and History. The vicious cycle repeats itself from Monday to Friday

Have a good thought over this!!
Posted by Lawrence Low at 12:15 PM

may i know where did u get the info of Tuition Industry In Malaysia?

I see your blog daily. your blog is very useful for me & i like so much..

Very nice information being shared by you. I like your strategy of putting things in an organized way, making it easier for the visitors to understand them. Thank you for taking time to impart the details. Best tuition services are provided by the TheTuitionTeacher in Delhi.
Home Tutors in Delhi | Home Tutors Delhi


Wow amazing post thanks for this. better approaches to learn for me.
I suggested you this post for best tutors Provider