Student's Question: What Level Of Foreign Reserves Is Perceived As Healthy?

Foreign exchange reserves (forex reserves) in its narrow definition refer to amount of foreign currency held in a Central Bank. In general, it also include bonds, gold & IMF reserves 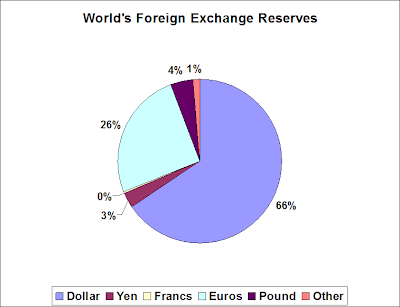 Source: babypips (Dollar is still the most dominant, despite the rise of euro) 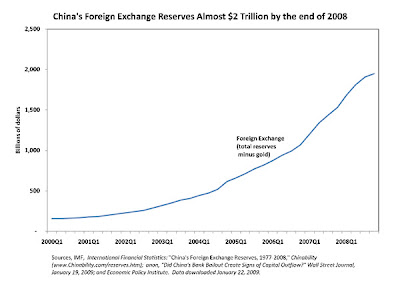 As of January 2009, China held $1.92 trillion worth of foreign currency mostly in the form of dollar, euro & gold. It had surpassed Japan ever since February 2006 to become the world’s largest foreign currency holder. In fact its dominance started when China joined as a member of WTO in 2001. This had allowed the Chinese economy to fully exploit the export-led strategy as they could get access into big economies of the West, which they once failed to penetrate

This is due to the status of MFN (Most Favoured Nation), where China will be granted trade advantages such as low tariffs as any other nation receives. Perhaps this is the biggest reason for its accumulation of foreign reserves.

Many countries could express their envy over China’s reserves position, but in general how much of foreign currency reserves is considered as enough for a country?

To be frank, there is no consensus among economists. There are indeed several methods to determine the adequacy of foreign reserves for every nation, but none of them can stand on their own. Furthermore the reliability of the measures depends also on macroeconomic outlook, credit ratings, trade positions, level of external debt etc

(A) Number of months of imports. Ideally, this measure determines how long a country can sustain its imports shall all other inflows of foreign exchange dried up. To ease understanding, ask yourself a question. How long can you sustain your monthly expenses using all your lifetime savings, after quitting/ retrenched from a job? The answer is simple. Of course, the longer the better. For many years, the guideline by IMF is 12 weeks (3 months) of imports. In Malaysia, our foreign reserves position can sustain 7 months of imports, which by far is considered as healthy. Countries like Sri Lanka which ran into crisis recently, have the reserves which can only sustain its imports to another 1.5 months

Capital account adequacy. This measure is of limited value. It focuses solely on the external current account which may be relevant in the past where capital inflows are limited & therefore countries may have problems in financing imports. However, due to globalisation many economies especially small & emerging have more open capital accounts these days & therefore received larger share of inflow. Therefore in a period of highly mobilise capital, the sufficiency of foreign reserves should also be based on rules that focus on the vulnerabilities of the capital account

In laymen, it’s not only how much I spend a month (imports), but also how much I can earn (all source of inflows)

(B) Depends on level of debts. The contemporary view is that, a country with ballooning debts may struggle to fulfil its debt obligations, unless it has sufficient foreign reserves. There are 2 popular measures. First, the level of debt service repayment as a ratio of exports of goods & services. It links to exports since that is also one of many channels a country can accumulate foreign currencies. Secondly, ratio of debt service to GDP. The latter is probably most heavily used. The lower the ratio the better

The latter is a blunder economics tool. It’s still in fashion probably due to its ease of measurement. But for sure, it addresses nothing about foreign exchange earnings. It is related more to the growth of overall economy. However, high levels of GDP growth do not guarantee foreign exchange growth. Unless, we are certain that that particular country’s production is geared towards export, which then explains for its growth & accumulation of foreign exchange e.g. China, India, Malaysia etc. For a country which is consumption driven, the accuracy could be questioned

(C) Guidotti-Greenspan rule. This measurement was introduced by Pablo Guidotti, the former Deputy Finance Minister of Argentina & was later publicised by Alan Greenspan during his speech in World Bank, 1999. According to this rule, foreign reserves should be equal to short term external debt with a maturity of one year of less. The rationale is that countries should have sufficient reserves to withstand withdrawal of short term foreign capital

Evaluation for (C)
Insufficient. Many economists have argued that the proposal of this measure has actually undermine many factors. Therefore they suggested that the targeting of reserve adequacy takes into account the amount reserves needed to cover short term debt as well as some mark-up to reflect unforeseen economic circumstances such as the potential widening of current account deficit or disturbance to the exchange rate

I'll be waiting for this one...

Thanks for the keen interest!