Why Sri Lanka Is Likely To Borrow From IMF? 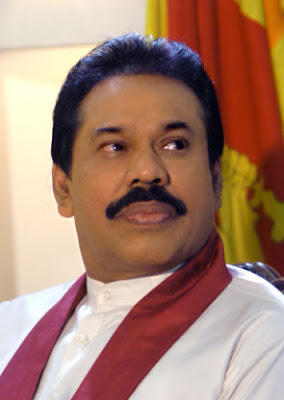 In picture: Sri Lankan President, Mahinda Rajapaksa
In the recent, Sri Lanka’s President Mahinda Rajapaksa in his stern voice mentioned that he will not bow to any conditions prescribe by IMF. The conditionalities or popularly known as SAPs (Structural Adjustment Programs) often requires the host country to slash its public spending, cut in public sector workforce, embrace privatisation etc

But we know it’s nearly impossible. Otherwise how will they get the financing they desperately need to cure the ailing Sri Lankan economy?

To me, he is in self-denial. President Mahinda will have to like it or not, sooner or later bow to all those conditions set by IMF. In fact there is already an increasing sign that Sri Lanka will need monetary aid:

(1) Falling foreign reserves. Its foreign exchange reserves have fallen from $3.5 billion in July 2008, to only about $1.7 billion in December. That’s an astonishing fall of 51% in just couple of months. Based on this figure, Sri Lanka is projected to be unable to meet the obligation of its current account deficit. The reserves available are only able to cover the most, another 1.5 months of import, probably the worst ever situation for any emerging economy (ours can sustain 7 months). This is probably the strongest reason why they need IMF assistance immediately

(2) Ballooning current account deficit. The deficit which once stood at only 3.5% of GDP, has shoot up to 8.8%. The biggest reason was due to large import bill on weapons from China, Russia, Pakistan & Israel. At the same time, there was a decline in export earnings due to the sluggish export in garments & tea, which are one of the backbones of its economy.

(3) Foreign investors pulling away. In the second half of 2008, there was a large outflow of $600 million, as foreign investors sold away rupee denominated assets e.g. government bond. This is also another reason for falling foreign reserves. There is growing fear that the government will be unable to cope with the crisis & also due to political stability e.g. military operation against the Tamil rebel. Despite, the successful sale of war bonds to Sinhalese expatriates, still it is insufficient to cope with the magnitude of fall in reserves

(4) Depreciation of rupee. This reminds me of the classical intervention of UK’s BOE in defending the pound against DM somewhere between 1990 to 1992. Here the Sri Lanka’s Central Bank is fighting a losing battle in defending rupee. It has spent about $200 million between September & November last year, in buying up rupee in foreign exchange market. Still, its value has depreciated about 6% up to date. In theory, this should become a great boost to their economy as exports become cheaper. However, the slowing market in its export destination is not helping this. Also, weakening currency has increase the value of its debt

(5) Rebuild the North & East. The current government is facing mounting pressure due to the declining standard of living on general & particularly on these two areas, where military operation heavily concentrates on. They desperately need a large sum of money for reconstruction, to build back those infrastructures that can attract foreign investors, schools & hospitals that will benefit the people etc. Furthermore unemployment is rising in recent months as many textile factories have shut down

It will be interesting to see what will happen this few days (up to 31st March), as it’s time for President Mahinda to declare his decision. I say YES, how about you?
Posted by Lawrence Low at 7:58 AM