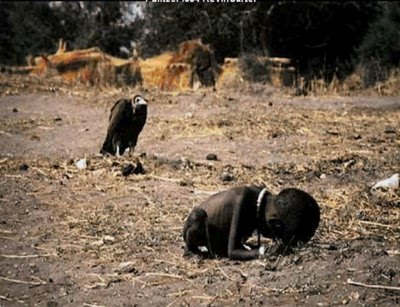 While social indicators slowly but progressively have improved all the years in many of African countries, the statistic of life expectancy at birth still by today shows a large disappointment. In fact, the top 10 countries with lowest life expectancy all originate from African continent.

These countries are like Swaziland, Sierra Leone, Zimbabwe, Zambia, Namibia & Botswana, where on average none of the male or female live beyond 45 years. This is a far cry compared to some countries like Japan with 85 years of age

Check ranking of countries in terms of life expectancy: http://en.wikipedia.org/wiki/List_of_countries_by_life_expectancy

(1) Famine. According to Malthus, there is a strong imbalance in terms population growth rate against the growth rate of food. While population grows geometrically, food supply grows arithmetically. Although argued by Western economists for undermining technology, his theories make very much concrete presence in African countries. Famine is everywhere since there is acute shortage of fertile land for growing crops. To worsen the situation, there is even lack of raindrops in many parts of Africa causing droughts & existing water supply is insufficient for irrigation.

Although there is food aid, very much of it falls into the hand of dirty politicians who disproportionately distribute it to their cronies or sell it in black market which undercut local prices. Lack of food & malnutrition seems to be one of the major factors contributing to low life expectancy

(2) Governments too poor to spend. Many of the African countries are said to be poor. There are just so many of them which are classified as HIPC (Highly Indebted Poor Countries) where they owe huge sum of money to IMF & World Bank. As such most of the tax receipts & other revenues are spent of just to repay these international organisations, leaving not much for them to develop local economy. Besides, they are also under the SAP (Structural Adjustment Programs), which required recipient countries to undergo fiscal austerity so that they have monies to pay back those debts.

As such, there will not be large allocation on hospital building. Therefore access to healthcare remains a great difficulty e.g. too far away, cannot afford medical bills. Even if hospitals are available, machineries & surgery equipments are often obsolete, break down & small in numbers. This explains why life expectancy is low

(3) Corrupt government officials. Some of the financial aid given does not reach those most needing. Bulk of it were siphoned to individual accounts, to be misused for pursuing political agendas & campaign etc when in fact those monies can be used to spend on building hospitals, upgrading hospital equipments, increase number of hospital beds, invest on R&D, buy medical drugs etc. In some places like Zimbabwe, hospitals were built only in the surrounding of capital city like Harare, which is benefiting those few rich ministers including Mugabe himself. If these hospitals are located in rural areas, many of those poor & ill people could have benefit from it

(4) Low level of education. There is a strong correlation between level of education & healthcare. People who are more educated, tend to have higher awareness regarding their personal & surrounding hygiene. Unfortunately, enrolment rate to even primary schools have dropped in many parts of Africa. As parents are not educated, so as their children

(5) Availability of clean water. As high as 45% of the people in Sub Saharan Africa had no access to clean water supply. As there is no alternative source, many of the poor collect drinking water from rivers, streams & canals polluted with human excreta & chemicals. The health & economic costs associated with waters are enormous. Millions of cases of diarrheal diseases, cholera, typhoid & hookworm are reported every year & in most cases are answered by death due to low accessibility to healthcare

(6) Widespread of AIDS. African regions are very synonym with AIDS. In some places the rate is very high, where one out of every 5 adults is infected by the deadly disease. There is no cure for this & the trend is worrying as number of new cases reported has increased dramatically over the years. In other word, we will be expecting more death in near future. Zimbabwe, Namibia & Zambia are few of the good examples I can cite. It is also closely tied to low level of awareness among the adults, which clearly can come only if one has pursued sufficient level education. The practice of unsafe sex & being force into prostitution due to poverty were the 2 largest contributors

thank you so much!

Can I know why the 10 year civil war of Sierra Leone has helped to shorten life expectancy. Two reasons would be great...