Why UK House Prices Used To Be So High? 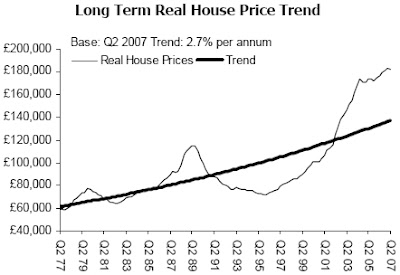 (1). Shortage of land. Increasing number of land has been turned into greenbelt. This is a policy to restrict urban growth. As such it is very difficult to increase supply of housing in places like Greater London, therefore making it extremely unaffordable. Other areas which begin to feel the pinch are like North West, South Yorkshire & West Yorkshire etc

(2). Demand outstrips supply. This is the fundamental of all economic theory. In UK, property market craze is deemed as normal & people will rush into it so long as buying opportunity presents itself. As such, property is the largest form of wealth for an average Britons, even greater than stock market

(3). Rising population. Increase in number of people coupled with strong inflow of immigrants had increased the demand for housing. At the moment, there are about 5 millions of them in UK, which means for every 14 Britons, there will be 1 immigrant

(4). More people are living separately. This is due to social force e.g. working in different areas, divorce etc I am a very good example. I used to live with my parents in Malacca, which means 3 in a household. Now, I’m staying alone in Kuala Lumpur which means I contribute to the demand for housing & I’m a single person household

(5). New mortgages are introduced. People are being lured into property market as banks use creative tactics to make housing looks “very affordable” even to the first time buyer. New mortgages that are increasingly popular are like interest only mortgage, self certification mortgage & 50 year mortgage (which is popular in Japan).

(6). Lower interest rates. UK base interest rates had been on a steady decline since 2001 & it hovers around 4-5%. This translates into cheaper cost of borrowing, & therefore encouraging more people to rush in the property market

(7) Rising incomes. Ever since 1992, UK has witnessed a long streak of uninterrupted economic growth. Along the way unemployment fell from record high of 3 million to around 1 million in 2007. In this period of rising incomes, people are more willing to spend onto property market given that it is the most popular & best long term investment

(8). Speculation. Just like stock market, we have speculators too in property investment. These investors speculate that house prices will sky-rocket in the near future, thus jump in & aggravate the demand for housing. More often than not, this is actually a self-fulfilling prophecy when every speculators share the same thinking