Economic efficiency
Efficiency is achieved if scarce resources are successfully combined in such a way, to produce only those products that are highly valued at the greatest amount using the least cost method. The idea of efficiency can be further divided into two and they are productive efficiency and allocative efficiency

Productive efficiency
This concept can be viewed from both microeconomic and macroeconomic perspectives. In the former, we always say that a firm is being productively efficient if it is able to produce at the level of output where AC is at its lowest. Mathematically, we can also write this as MC = AC. Why is that so? The answer is very simple. The MC curve will always cut the AC curve from its minimum and hence the relationship is established in such a way

From macroeconomic angle, we can actually use the PPC to reflect the idea of productive efficiency. A nation is said to be productively efficient if it is already operating along the boundary of its PPC. There are no wastages in the economy e.g. unemployment and idle machinery and all resources have been fully and efficiently utilised. By stretching the usage of all resources to the their potential, a country will be able to land on its frontier

Allocative efficiency
Again, in the same way, we can view the concept of allocative efficiency via both microeconomic and macroeconomic angles. The former can be attained if a firm operates at the level of output where P = MC. It is worth nothing the identity of P = MB = MU. In fact, they are all the same. Why? The price that consumers place on a product is actually the benefit or the satisfaction that they think they can get from using it. If a customer values the consumption of a particular output, he or she will be prepared to pay a price that justifies their preference. Would you be willing to pay MYR 2,000,000 for a second-hand car? You know the answer. But, if I change the subject to Lamborghini Aventador 6.5, then you would most likely say yes and perhaps willing to pay more (if you can afford to do so) because the market price of this car in Malaysia is around MYR 2.8 million. You are willing to pay such a high price because you feel that the benefits worth that much. That is why, a product is allocative efficient if P = MC or MB = MC. The price that people are willing and able to pay reflects the costs of producing it

From macroeconomic angle, allocative efficiency is attained if an economy is operating along the boundary of its PPC. Resources have been combined in such a way to produce the highest level of output which is valued by the consumers

Achieve both simultaneously
An economy is able to become both productively and allocatively efficient upon the condition that resources have been gathered to produce the maximum number of output using the least cost method where all the products are actually what the people want. Interestingly, all the points on the PPC are productively efficient. However, there can only be one point which can be regarded as allocatively efficient. It represents the combination of two goods which is most optimal/ preferred 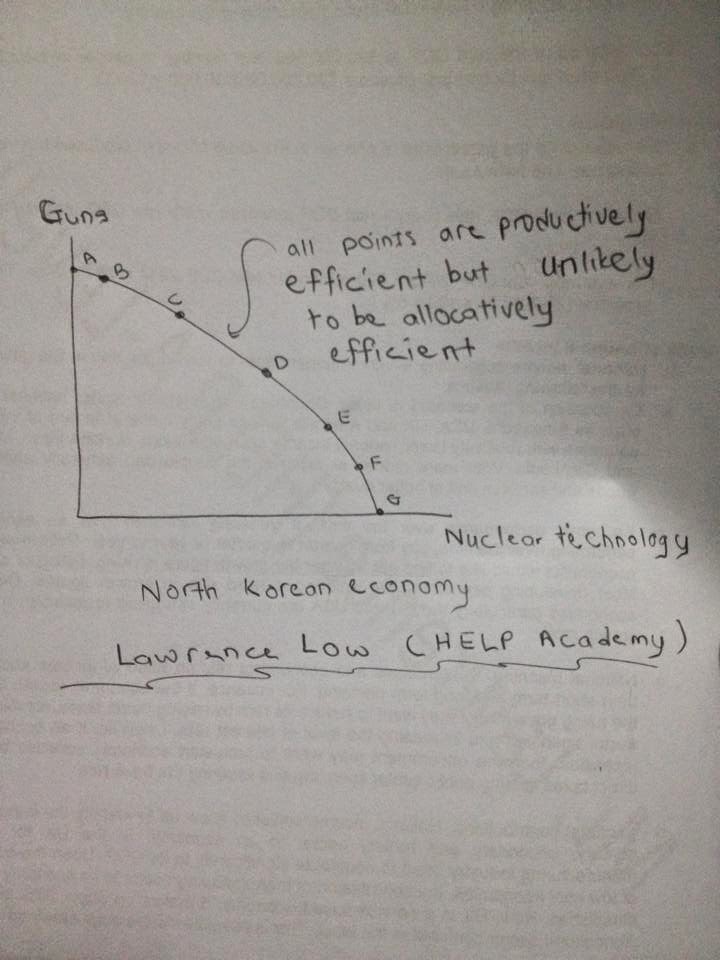 Not possible to achieve both simultaneously
It is also possible that an economy can actually achieve one without the other. Think about North Korea. Think about the famous famine which took place somewhere between 1994 and 1998. It was a period that no one can ever forget. Millions of North Koreans died of hunger. The communist/ socialist government under the leadership of Kim Jong-Il particularly operated by the principle of ‘Songun’ or more commonly known as military-first policy. This seems to be somewhat antithesis because in a command economy, it should be people’s interest that comes first. What happen was, the military sector continued to get more attention e.g. weapons and nuclear technology. The economy as a whole may be productively efficient but definitely not allocative efficient. Scarce resources are not devoted towards what the people wanted and value the most-food products, healthcare, education and other modern infrastructure