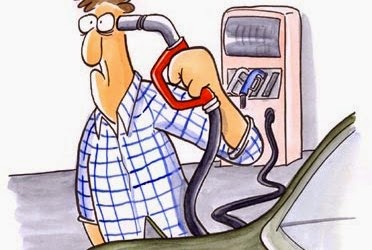 Economic costs:
1. Regressive effect. Oil is a necessity and therefore its PED must be inelastic. Whenever the price increases, its quantity demanded will fall but less than proportionate. This indicates that monthly household expenditures will surely increase. The socially most disadvantaged groups will be the one affected as fuel expenditure will now take up a larger portion of their disposable income

1.Standard of living will also decline. As more money is devoted to paying for fuel, it will create more opportunity cost in terms of other spending. As an example, lesser income for children’s education, family’s healthcare, baby’s milk powder, vacation and others

2. Cost-push inflation is inevitable. Higher fuel prices will eventually be passed on by producers to average consumers like us. It is worth noting that everything out there is associated with fuel as they need to be transported from factories to retailers. Employees may also start to bargain for higher pay which can cause the cost-push inflation to worsen

3. Slower economic growth. As the aggregate supply (AS) curve shifts backward, not only the price level increase but we will also witness a fall in real GDP or real income. This is associated with the slowing down of economic activities. If the impact is major, then in the short run, Malaysian economy may experience a stagflation (stagnant growth and inflation)

4. Some firms in the economy will definitely be affected by such ruling especially those where fuel costs make up a large portion of total costs. They may react by cutting workers or worse, go out of business. Logistic firms fall under this

5. A possible fall in price competitiveness. An increase in the costs of production will have to be passed on in the form of higher price and it is afraid that our goods will be even less price competitive after this. Global economies are yet to fully recover and that means a weak export. If this is taken into account, Malaysian exports are likely to fall further. Trade position will worsen

6. Such move is also politically unpopular. This may cause the ruling government to further lose votes in the coming election (possibility is remote as people ‘may have forgotten’ about that)


1. This may instantly improve government finances. It is worth noting that Malaysian economy has a huge budget deficit and in fact our national debt (accumulated annual debts) has exceeded the permitted target. By rationalising the subsidy, the gap between public sector expenditure and taxation will fall

2. An improvement in government finances will lead to better credit rating by international rating agency such as Fitch and Moody, S&Ps and others. In future it will be much easier or possible for Malaysian government to borrow more money for development projects. Vision 2020 makes this objective imminent

3. Critics argue that while most countries around the world have agreed to lower down their petrol pump prices in conjunction with global oversupply, Malaysian government took the opposite stance. Despite a price jump, our price is not even reflecting the equilibrium price which is actually higher. Other countries may have reduced their price but that is because they priced it according to the market mechanism

4. In the business world, firms are fiercely fighting with one another to survive. Higher costs, inability to reduce inefficiency and the need to suffer from low profits and go bankrupt is a price that must be paid by uncompetitive firms. To some extent, it is ‘good’ to have some firms out of the market especially in industries that have been oversupplied with firms. At the end, only the genuinely competitive ones will stay

5. On the bright side, an increase in fuel prices may inevitable force some Malaysian firms to invest e.g. providing training and look into other more efficient methods of production. This will not only offset an increase in costs but also help to increase our aggregate supply
Posted by Lawrence Low at 9:02 AM

We Can supply Aviation Kerosene,Jet fuel (JP 54-A1,5), Diesel (Gas Oil) and Fuel Oil D2, D6,ETC in FOB/Rotterdam only, serious buyer should contact or if you have serious buyers my seller is ready to close this deal fast contact us below:now base email us (neftegazagent@yandex.ru)