Why US Will 'Never Default' On Its Debt? 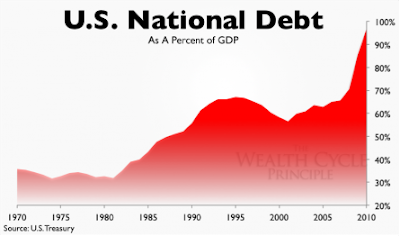 Over the past few weeks, the whole world was again shocked with the news that a default in national debt is imminent for the world’s largest economy. The IMF and Republicans are warning that US had survived all the ups and downs thus far, but is unlikely going to make it this time with the size of its debt spiralling towards the size of its GDP. The two most significant events that cause government spending to swollen are war in Iraq and costs of bailing out inefficient private institutions in recent times

Despite all the heated arguments, I would like to be a contrarian this time. After doing some investigation, I find that such claims are more likely to be ‘theoretical’ than facts.

The Congress has allowed an increase in debt ceiling for the past 10 years and I don’t see the reason why they will not allow it this time. The only ruckus is that, it has been more contentious this round, since the government fails to fulfil its election promise to run down the fiscal deficit. It has to be passed, no matter the cause. Failing to lift the ceiling will cause US to be unable to meet the obligations of Social Security and interest debt payments. US will default for the first time in modern history, sending a negative multiplier effect to the world since all countries are so interdependent

Let’s consider an interesting development. Portugal’s budget deficit is about 8.6% of its GDP, far greater than what is stipulated under Growth and Stability Pact. It causes the government to go broke and finally go to IMF, EU government and ECB with a begging bowl. Here’s more, Ireland and Greece with a budget deficit of about 14% of its GDP. But wait. US’ fiscal deficit was just 8.9% as of 2010 and is has not defaulted up to date. So it is crystal clear that, size of budget deficit and national debt expressed as a percentage of GDP isn’t that matter to investors but rather the confidence factor!!

Here are some more convincing examples. UK survived World War 2 with national debt of 240% of her GDP and US exited the same war with debt over 100% of the GDP. Both didn’t default. Interestingly, Japan being the developed country has the highest national debt in the world (200% of GDP) and yet able to secure loans or interest rates that are close to zero

Well, US is in a special position unlike those peripheral countries within the Eurozone. It has the privilege of borrowing in its own currency and print dollar to inflate itself out of debt rather than defaulting. In other words, it has the alternative of paying back with dollars worth much less than what it has borrowed earlier. As long as this does not get completely out of control such as occurrence of hyperinflation, I don’t see why this is not a preferred alternative

(4) Everyone world needs US

Major economies such as China, Japan and Saudi Arabia need US badly. Frankly speaking, there is no way they will get exhausted buying these IOUs. If the US cannot get the needed finances, then its economy will cripple and there will be no other major economies that can purchase the cheap Chinese goods, electronic products and cars from Japan and oil in a profitable quantity like US does. In layman, they need to lend money to US so that US can grow itself out economically to pay off some debts and to purchase goods from these countries. We cannot mess with such system, failing which may indicate a new form of de-globalisation

Your Net Worth Will Be More Than Halved After This…

Your Savings Will Be Worthless After China Does This

China Will Destroy Your Net Worth

Did you know that China is USA’s largest debt holder?

This means that all they need to do start devaluing the US Dollar is by selling their debt holdings to their secondary market.

This means the US Dollar value itself will crumble.

Some financial analysts have stated that the USD will more than halve in value over the next few months.

Are you and your family prepared?

Make sure you don’t let your net worth and savings be rendered worthless.

However, it’s not all bad news.

There’s a way that you can actually PROFIT from the fall of the US dollar and also any other economic collapse in the future.

Just click on the video before and learn how you can join the 1% of the elite that makes money each time there is an economic downturn.