Is Pakistan Economy Ready To Embrace The Worse?

It seems that the flood-nightmare in Pakistan is not over yet. Although the Indus River is already at its 50-year high, it is expected that the water level will continue to rise. With the scale of such calamity, Pakistan is now officially known as the sickest economy in South Asia. Although millions have been contributed by international agencies and governments, still it is insufficient to restore homes, food, buildings and casualties which were washed away by the flood. In some areas, people complain that the aid has not reached them

(1) Militants recruit. There is no perfect atmosphere other than now for jihadists to exploit the situation by spreading seeds of anger and recruiting militants. It is reported that some Islamist charities with suspected links to militant groups have stepped up by providing tents and food for those victims particularly in the northwest, an area dominated by the terror groups. If the Pakistan government does not act fast enough to reduce the scale of the disaster and reach those areas where help is needed the most, I strongly believe that they will have more problems to deal with in the future. Once the number of militant increases, Pakistan and US government will have to spend more money to strengthen the defence

(2) Disruption to economic activities. Pakistan has a broad primary sector where it mainly produces wheat, rice, cotton, sugar and livestock. It contributes to about 22% of her GDP and is the largest employer, hiring 45% of total workforce. Unfortunately, the flood has hit the agriculture heartland very badly. 500 000 tonnes of wheat, 2 million bales of cottons and 200 000 livestock were gone just like that. It affects the livelihood and income of thousands of farmers as well as employment in related sectors such as food processing. Decline in the farming output will probably put Pakistan’s economy to a halt and say ‘goodbye’ to the targeted growth of 4.5%

(3) Reduction in potential capacity. Most of the productive economic resources like land, labour and capital are devastated in just a matter of two weeks. Up to date (27th August), the flood has officially claimed 1600 lives and it is strongly believed that this figure will rise significantly once the water level recede, allowing for other bodies to be counted. It will also further rise due to the slow emergency aid for clean water supply and considering the fact that many are consuming from contaminated water, thus carving path for water-borne diseases. On the other hand, the flood has engulfed huge arable farming pastures. As such, many types of agricultural activities will be ‘forbidden’ in many seasons to come, due to the drastic change in the structure of soil e.g. water-logged. The government’s official assessment estimates that roughly 5000 miles of roads and railways, 7000 schools, 400 health facilities and thousands of agricultural tools like water mills are washed away. This has many implications. Without roads and railways, agricultural output cannot be delivered to designated areas. Factories output will be stranded while waiting to be sent to port. Inability to acquire basic education and healthcare will further reduce the productivity of the people while not having sufficient machineries to work with further reduce Pakistan’s output. It is best illustrated by an inward shifting PPF 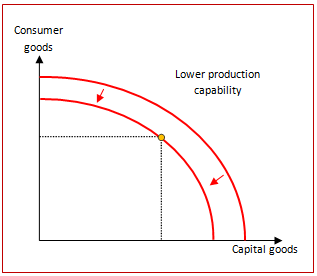 (4) Inflation and ballooning deficit. Inflation is defined as a sustained increase in price level. In June, inflation rate was at 12.67% higher than a year earlier, while in July it rose another 12.34%. With such scale of destruction, consensus is now somewhere around 20% in the nearest future. It is largely contributed by escalating food prices and the destruction of food supply distribution network. While it is a great relief to hear that the Pakistani government will gear towards an immediate reconstruction, such news must be treated with great caution. Due to the insufficient foreign assistance, the rise in fiscal expenditure will have to be borrowed from the Central Bank, leading to the increase in money supply thus potentially push the inflation higher. Even the initial forecasted budget deficit for the year 2010/11 is considered as far too optimistic. With the inevitable rise in government spending and fall in tax receipts due destroyed output, it may be at least 6% of GDP now. The deficit reduction was part of the agreement between the government and IMF due to the extension of loan in 2008. Seems that the noble goal has to be brushed aside for a more severe humanity crisis