What Can We Expect In Period Of Recession? (Unit 3)

(1) Greater savings. Savings will increase upon 2 reasons. First, as consumer confidence fall, they are unlikely to spend on big ticket items such as property, cars, expensive imported goods etc. This has something to do with job security. Second, people increase their savings to meet unexpected events

(2). High unemployment. During recession, businesses do not fare well. As such they may not need as many workers as before & this leads to unemployment. It’s also part of cost-cutting measure. To the government, it has to spend more on unemployment benefits such as the Jobseekers Allowance

(3). Lower interest rates. Depending on the severity on the recession, Bank of England may consider to lower the base rate, to boost spending into the economy

(4). London Stock Exchange plunging. Performance of shares is closely connected with the profitability of firms. Fall in the number of projects & capital expenditure often being regard as bad news for investors leading to heavy selling thus the fall in prices of share

(5). Expansionary fiscal policy. The government will pump in more money onto the public sector & at the same time will likely consider a cut in tax rates on working individuals & firms. Shall the government spending exceed the tax revenue, we call it as fiscal deficit. The shortfall will be covered by borrowing from the private 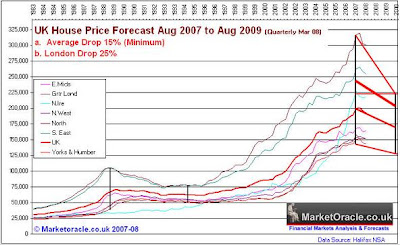 Source: http://news.goldseek.com
(6). Housing market crash. In business cycle, booms will be followed by bust. However in the period of boom, asset prices will rise rapidly thus encouraging developers to construct more houses. However in the period of unexpected economic downturn, these supply of houses will always exceed demand leading to a rapid fall in asset prices. Since large number of Britons store their wealth in property, this has a great negative multiplier effect onto economy. Refer to graph above

(7). Weaker currency. Depreciating pound translates into weaker purchasing power. People will consume lesser of imported goods & this may lead to fall in the standard of living. Also weaker currency leads to problem like imported inflation
Posted by Lawrence Low at 8:06 AM