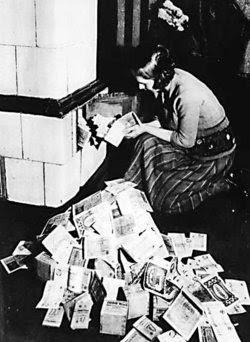 Inflation itself is defined as sustained increase in general price level. Hyperinflation as whole means continuous increase in price level which is out of control

How it started in Germany?

Germany began to suffer serious inflation during World War I. The German government did not finance the war by taxing its people more heavily. Instead it paid its bills by printing more banknotes. Soon there was too much money chasing too few goods. An inflationary spiral had started here.

Things got worse at the end of the war. A huge amount in reparations was demanded from Germany (Germany lost the war to Allies). The sum to be paid was fixed at £6,600,000 in 1921. Many foreigners thought that Germany would be unable to pay. They began to lose confidence in Germany's currency. Foreign banks and businesses expected increasingly large amounts of German money in exchange for their own currency (excessive supply of money leads to depreciation)

It became very expensive for Germany to buy food and raw materials from other countries. This led to a further increase in prices in Germany (imported inflation). In late 1922 they tried to support the Mark by purchasing it in the foreign exchange markets. However, since they continued printing new currency at a feverish rate, the attempt failed

Late in 1922 Germany failed to pay an instalment of reparations on time. France replied in January 1923. The French troops occupied Germany's main industrial region, the Ruhr. The French were determined to make Germany pay every penny it owed. They wanted to keep Germany weak as weak Germany meant that France was safe from the threat of attack.

The German government ordered a policy of passive resistance in the Ruhr. Workers were told to do nothing. What this meant in practice was a strike. The cost of the government's policy was frightening. All the workers on strike had to be given financial support. The government paid its way by printing more and more banknotes. As a result, there were too much money in the circulation, leading to spiral increase in demand for goods which was not met by the increase in production. Hyperinflation raged.

2. Debt burden eliminated. Those who had access to credit borrowed heavily for business purposes, and inflation wiped out their debt. In other word, the 1,000,000 Mark those businessmen borrowed is worthless in nearest future when they repay it.

1. Waste & inefficiency. Bewildering fluctuations in costs prices & wages made it impossible to allocate resources and production rationally. Furthermore much of the new capital plant invested is unneeded

2. Fall in productivity. Workers knew that their paper wages are rising rapidly & will continue to rise in the light of hyperinflation. This certainty caused them to be more reluctant to work harder. As such there is a fall in productivity

3. Fall in the value of savings. Savings in bank accounts were wiped off with the spiraling inflation. Retirees & pensioners were the one suffer the most that time

4. Waste of time & energy. Government & economists wasted too much time on speculating the value of the currency. Paper work increased multiple folds

5. Increasing income gap. The rich became richer, while the poor became poorer. The very rich were land owners & could produce food on their own estates. By doing so, they could at least mitigate the effect of spiraling food price inflation. The poor suffered the most as not only their hard earned savings disappeared overnight but also nothing e.g. land to back them up

6. High unemployment. Towards the last stage of inflation, economy began to collapse. Retailers could not get goods & increasing number of shelves became empty. Now unemployment began to soar

For a good explanation of hyperinflation in general, check out: