US Is A Step Closer To Japanification

To me 2010 is a ‘fascinating’ year. It represents economic threats as well as opportunities for countries around the world that are closely linked to one another via international trade. Heat of debates seem to have moved from topics like ballooning national debt, possibility of hyperinflation through quantitative easing, current account deficit to one where deflation is inevitable

Deflation vs. disinflation
Before I go into the details, it will be interesting to explore the difference between disinflation and deflation. They are not quite the same. The former means prices of goods and services are rising but at a slower rate. Meanwhile deflation is a complete fall in prices of goods and services, hence is a negative inflation rate. If disinflationary period continues until inflation rate is zero, only then the economy is said to have entered into a deflationary period

The Japanese experience
The word deflation is synonymous with the Japanese economy and I mean VERY. Before the so called Long-Lost-Decade which began in early 1990s, Japan had gone through a period of economic miracle until late 1980s. Savings in the banks were at all time high. Since loans and credits were easily available, speculation was imminent particularly in the real estate market and Tokyo Stock Exchange. At the peak of the bubble, Nikkei stock index was over-rated and value of real estates was extremely over-valued fetching up to USD $139, 000 per square foot. It was acknowledged that property prices in Japan were the highest in the world at that time

There are many versions of arguments surrounding the meltdown of Japanese economy. The most popular is that income did not grow fast enough to service the increasing debt load which resulted in growing defaults and delinquencies. People and companies that had borrowed from the banks to invest in real estate were unable to repay the banks when property prices fell. Even banks became insolvent due to credit shortage and lack of liquidity in the entire financial system

Recession to depression and deflation

Recession is generally known as two successive quarters of negative economic growth while depression is viewed as a sustained long term decline in economic activities which is followed by events like shrinking consumption, bankruptcies, large scale unemployment and banks on the run. It is lengthier than recession. Somehow, there is no consensus over how long an economy should be in recession before turning into a depression 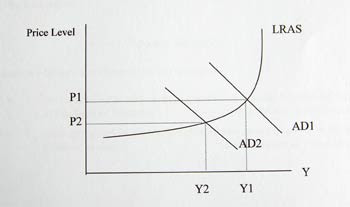 It is strongly associated with collapsed of spending into the economy, thus driving AD leftward. This is usually followed by a fall in price level. To be honest, deflation/ disinflation is much more difficult to be tackled than inflation. It is extremely difficult to revive consumer and business confidence once it had totally collapsed. The Great Depression in US and Japan tell all the tales.

Why deflation is disastrous?

(1) Exacerbate depression. When general prices fall, consumers will expect goods and services across the economy will be cheaper somewhere in the near future. As such they choose to defer current consumption. It will not be the case of one or two individuals but the entire nation will think alike. As people defer spending, consumption which is one of the drivers of economic growth falls, further shifting AD to the left. It does not take a genius to see that price level falls. They cycle continues

It is also worth to note that, in such period return from savings is higher. Even when the nominal interest rate is 0% and deflation is say, 3%, the real interest rate is would be 3%. What I’m trying to say is that, although the value of money does not grow (0%), prices of things in the economy become cheaper (-3%). In other words, for every 100 yen, one gets to purchase more goods. Purchasing power has increased. No wonder there is an incentive to save!!!

(2) Increasing the value of debts. During inflation, value of debts will be eroded since the same amount of money that bank receives worth lesser over the time. On the contrary, deflation causes mortgage repayment to be a problem. In depression, wages are falling. Assuming that one owes the same amount of money, the monthly commitment expressed as a percentage of total income will rise

(3) The end of monetary policy. During the period of high inflation, interest rates can be raised indefinitely to slow down spending and investment. However, in deflation, interest rates cannot go lower than 0%. It just does not make sense to have negative nominal interest rates. Therefore this marks the end of the conventional monetary tool and the Central Bank will have to depend on non-conventional method like quantitative easing (print more money). Such new monetary policy action belongs to the realm of experimentation (considering the Fed consulted Japan last year over this) and therefore is prone to error. Policymakers are now left with fiscal tools

Will US turn Japanese this round?

I hate to say this but too bad US is no longer an engine for global economy. Despite still being the world’s largest consumer, it began to lose its steam few years ago. Its dominance is gradually shadowed by the emergence of China and India which easily register an 8% to 10% real GDP growth every year. To make things worse, US economy seems to inherit the Japanese-style meltdown ‘disease’. There are just too many evidence leading to this

(1) Similar origin. Both economies experienced a period of unsustainable economic growth which eventually led to a drastic rise in income. High consumer confidence coupled with liquidity rush in financial institutions largely explain why Americans and the Japanese dare to assume debts beyond their appetite. Rise in income however wasn’t for long but too much debt had already been taken to finance the purchase of residential and commercial properties. One by one began to default in loan repayment. Banks now face cash shortages and hence unable to generate lending. Demand for real estate falls. The property bubble finally burst. Arguably the condition in US is said to be worse due to the introduction of various unsafe loans as well as mutation of debts

(2) Ageing population. Although population is still growing in US, its rate is slowing down markedly, somewhere close to 1%. This is exactly what Japan had experienced in the 1990s. The only difference is that Japan has entered into the era of shrinking population and it may not be too distant in the future before US joins the league. Why is this bad? We first look at the population pyramid. Too many elderly people indicate more trouble for government finances. Bulk of the money will be channelled towards unproductive use like pension payments and the setting up of certain healthcare department to address elderly-related disease. This way of spending will not lead any economy out of trouble. Secondly, where to get the needed finances? Raising the income tax is a big NO-NO from me. Shrinking workforce may mean that working individuals will have to devote 50-60% of their wages to tax so that it can sufficiently cover the expenditure for the retirees. Finally, shrinking population means US will no longer be a consumption driven economy. All these points to frail recovery

(3) Forever rising debt. The current level of US national debt is about USD $ 13 trillion or 89% of her GDP. It is the sum of all the outstanding debt owed by the Federal Government when it runs budget deficit every year (G>T). Two-thirds of the debt is owed to firms, people and foreign governments who bought the bonds issued by US government while the rest is owed to itself via Social Security. Whatever money that has been borrowed will have to be paid back some dates in the future. Right at the moment, there is still no clear solution over the pension payment to Baby Boomers. Number of retirees will increase significantly over the next two decades. Theoretically, taxes must increase. It is just a matter of time before US discovers that foreign government will gradually shy away from all those bonds. Fall in the demand for these securities will cause its price to fall (law of demand) and interest rates to go up (inversely related). This will eventually worsen the state of economy. Furthermore, lessening of demand for bonds will put downward pressure for dollar. Therefore, foreign holders get paid back in currency which worth lesser. Demand for bonds fall further. In a nutshell, ballooning national debt will put a brake to US economic growth

(4) End of traditional monetary policy. Policy makers is US seem to head towards a ‘dead-end’. It faces almost the identical problems experienced by Japanese economy. Like I mentioned earlier, zero interest rate policy does not do any good. Economic activities remain weak partly because some of the banks are still reluctant to pass on the rate cut or while some others just make it more difficult to get credit by imposing various conditions. On the other hand, consumer confidence is at record low. Job losses are on the rise which further undermine borrowing and spending into the economy. Perhaps the Fed will have to keep interest rate low (0% -0.25%) until certain level of inflation is achieved. Although quantitative easing has been aggressively conducted, credit growth and broader money creation still fall. Velocity of circulation for money slows significantly

All these are clear indicators that US economy is ‘ushering’ an era of deflation. It will not happen today, tomorrow or next few months. But for sure, it is underway

just had to tell you I love the term japanification, never heard that one. tom