Why Malaysia Remains An Attractive Destination For Foreign Investors?

Malaysia’s success in attracting inward investment is not something unusual, but a record surge in the midst of global economy slowdown is phenomenon. Throughout 2008, we recorded an increase of 38% of FDI. This shows that in the event of rainy days, our economy is perceived as one of the ‘safest haven’ in the world 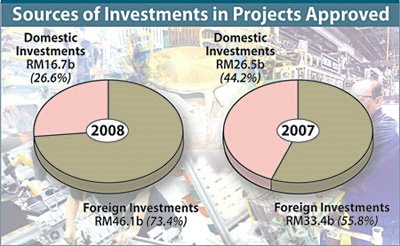 However, this figure is likely to decline this year given the worse than expected global recession. Nevertheless, I’m still optimistic that Malaysia will remain an attractive destination due to its underlying fundamental, both in medium & long term

(1) Vast natural resources. Malaysia is blessed with reserves of tin, bauxite, iron ore, copper, uranium, timber, oil & natural gas. Besides, it also has comparative advantage in rubber & palm oil plantation due to the suitability of its soil & weather. As such, it is said that Malaysia should specialise in these areas given that it can produce at a lower opportunity cost than any other nation & then trade. That also explains why we are one of the biggest rubber & palm oil producers for the world market. Multinationals are considering this as an added advantage when deciding where to be based. Raw materials to facilitate production are easily accessible & at reasonable price. It will help them to lower down their average costs (AC)

(2) Income tax lowered. Effective from this year, the maximum individual income tax rate was lowered from 28% to 27%. It has both demand & supply side effects onto those high flying earners like foreign corporate figures or foreign professionals. By having greater disposable income, they are able to increase their private consumption. Also, it can increase their incentive to work harder since they get to keep a greater percentage of their income 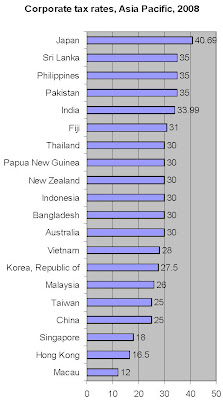 Comparison of corporate tax rate
(3) Lower corporation tax. Corporation tax was brought down to 25% in 2009. Now, with higher post-tax profits foreign firms will have greater incentive to invest in capital goods & engage in R&D activities. It may lead to new production techniques or technology that will assist them to further cut costs in times of turbulence
(4) Infrastructure. Malaysian government is committed in its infrastructure spending, although subject to some implementation lags. The Peninsular Malaysia’s highway network is one of the most efficient in Asia, providing the link to seaports & airports. This was complemented by the establishment of ARX (Asean Rail Express) which helps to transport containers to designated destination. It will soon be expanded to Singapore, Laos & Vietnam before ending up in Kunming, China. Multinationals will be able to cut transportation cost significantly

Also we have several airports, with the biggest one KLIA (Kuala Lumpur International Airport) has the capacity of handling up to 8 million tonnes of air cargo a year 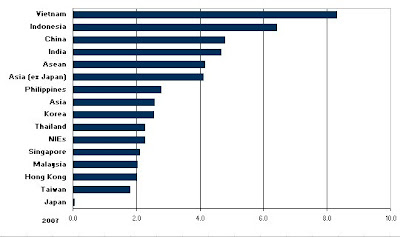 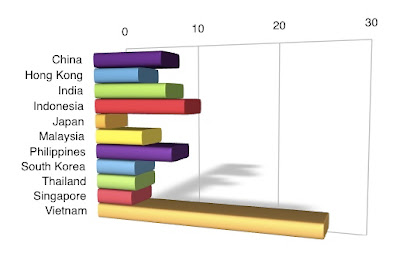 (6) Increasing income per capita. Rising income is central in developing economies like ours as it is a sign of the emergence of middle class income earners. These people have high marginal propensity to consume (mpc). It means, with every increase in RM 1 of disposable income a large proportion of it will be spent. The trend is healthy as it indicates the potential market for foreign firms to tap. Although we are growing rapidly in this sense, we are still behind China & India. Therefore, this just remain as a minor attraction for foreign firms

(7) High productivity. Malaysian workforce is one of the most productive in Asian region. Literacy rates are high as on average school leavers will have nothing less than 11 years of basic education. Increasing number of polytechnics & vocational institutions will help to cater for the industrial need. Also, Malaysian government is committed to increase spending onto education & healthcare sector under every of its five-year development plans. This will stretch the productive capacity of the local economy. Workers are able to operate complex machineries, understand complicated instructions & take lesser days off as sick leave

(8) Weak labour union. Our labour union is very weak unlike those in euro zone. Therefore, industrial disputes hardly surfaced. There will be no wage pressure for firms & this will keep production costs low. Also Malaysians are hardworking people. In reality, the people here especially in corporate sectors will work for about 9 to 10 hours a day (start work at 9am) & some even work on weekends. From economics point of view, more works could have been done & these help to minimise production costs. Workforce in an organisation can be rationalised
Posted by Lawrence Low at 9:00 AM